Hurricane Sandy – also known as ‘Frankenstorm’ – started in the Caribbean Sea on the 19th of October 2012 and was deemed to only have a 20% chance of developing into a superstorm by the U.S National Hurricane Centre. Climatic conditions, however, were to pull winds in this area into a counter clockwise rotation, and so the storm began to increase in energy until it became Hurricane Sandy. She left at least 69 people dead across the Caribbean as she made her way north before meteorological conditions lead to Hurricane Sandy becoming the ‘perfect storm’ – one guaranteed to devastate the East Coast of the U.S. High pressure to the east blocked Sandy from moving away from the coastline as she came up from the south, as the hurricane would have under normal conditions, and instead merged with Hurricane Sandy to produce an even more powerful and rare ‘hybrid’ storm. Hurricane Sandy is an example of a high magnitude, low frequency event occurring under rare and unpredictable conditions. The question of whether the magnitude of Hurricane Sandy was the result of increasing global temperatures currently remains unanswered; at present scientists are studying the events that took place throughout the life cycle of Hurricane Sandy to help judge whether such storms are likely to occur in the future. 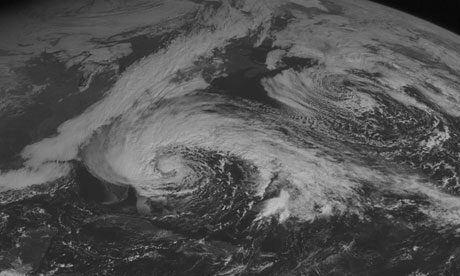