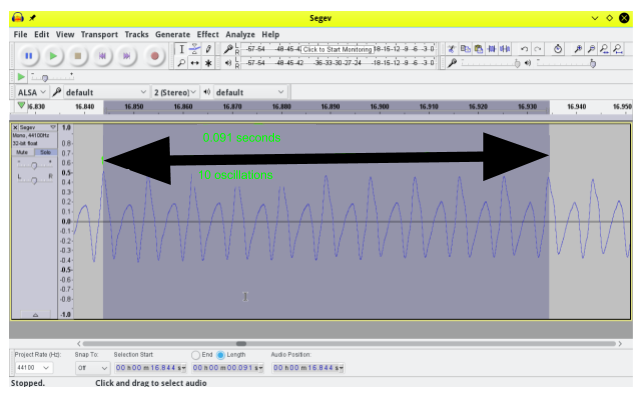 The purpose of this study was to develop a tool to compare the ability of individuals to tune a guitar as accurately as possible. This was done by recording the sound waves produced (by the guitar), taken alongside a software called “Audacity”, and manually analysing them using statistical analysis. The resulting tool was astoundingly accurate, however it was too tedious to use and therefore this requires further improvement, perhaps through automation.

There are many people throughout the world that want to know how good their musical abilities are and feel the need to check for themselves. Those who are more musically inclined are able to: reproduce a melody, range tones in increasing frequency, maintain a pitch while singing and/or tune an instrument more precisely than those who are not musically inclined.

In music, each note has its own specific pitch or tone. 12 of these notes, 1 semitone apart from each other, form an octave, and over one octave, a note’s frequency doubles.

The distance between two notes, each of which has its own frequency (sometimes called the pitch in music), and , are expressed as a ratio rather than a simple arithmetic difference or percentage difference:

Where and are the frequencies of the notes.

A unit of distance commonly used for tuning instruments is called a ‘cent’. There are 100 cents between two adjacent notes. In the book Music a Mathematical Offering [1], the formula given to calculate the distance in cents is as follows:

The more experienced the person is in the musical field, the better their ability to recognise tones will be. It was reasoned that those who have worked with music have got used to the sound of the “correct” pitch, which is standard given the music that they work with, and thus they are able to identify it easier. Naturally talented people will tune the instrument better, perhaps after slight instruction so that they understand what the “correct” pitch would sound like.

First, a stability study of every string was conducted to assess how well the string maintains its frequency over a short playing time (2 seconds) and also over a 15-minute time interval. The guitar was pretuned using a guitar tuner (either a program or a physical device) as a reference to check that all the strings were tuned correctly. To adjust the frequency of a string, its tuning peg was turned.

In this study, 5 participants with different musical backgrounds (musicians and non-musicians) were handed a guitar, the base string of which was pre-tuned. They were then asked to tune the remaining 5 strings of the guitar according to the sequence in the guitar textbook.[2]

All strings, except for the A string (the second-thickest one), were then mis-tuned by turning the tuning peg of a string by a random amount. The guitar was then handed the guitar to the participant, and they were asked to tune the 5 other strings. After a short break, the task was repeated by the participant.

As soon as the person had completed the second tuning, they were asked to play one string at a time and record the sound via the program ‘Audacity’:

We then computed the frequencies of individual strings via the formula:

In this study, we typically used about 80 oscillations, however, that number was subject to change depending on the stability of the string.

Since in music relative tuning is important, mistuning was measured as a ratio:

Mistuning was measured in cents and the mistuning for the five remaining strings was calculated, and presented in a table for each participant.

It was recognised that it was necessary to produce a single number that sums up the mistunings of a participant. A commonly used measure to compile data into a single number is known as standard deviation (σ), and is expressed as:

Where mist is the mistune of a string, and the subscripts EL, D, G, B, and EH are the names of the five strings and n is the number of strings (5). In this scenario, standard deviation expresses a summary of a person’s mistunings. This allowed the participants’ results to be compared.

Figures 3-7 show the mistunings of each of the five participants, while Figure 8 provides a summary of results. The most important number in the tables is the last number, called Sigma (standard deviation):

Participant 1 was a musical student for 3 years at the time this study was conducted. It is worth noting that the G string was particularly unstable in its frequency (see Figure 9) due to how it was tuned, so 3 different sections of its sound were analysed, and the mean was used. The sigma of about 9 cents shows that while some capabilities are present, they are not enough to properly tune the instrument.

Participant 2 was a musical student for 8 years at the time of this study. It is worth noting, in particular, that the higher frequency strings had higher mistunes, likely because the proper method of tuning strings relies on using the adjacent string that was last tuned, which can lead to the mistunings accumulating. The sigma here was about 24 cents, which is higher than that of subject 1.

Participant 3 was a professional musician, who had been performing consistently for 40 years up to that point. As such, this subject had a great deal more experience than any of the other participants in the study, and a much better understanding of the nuances of how to properly tune a guitar. The sigma of about 4 cents means that this guitar would be considered properly tuned.

Participant 4 had no previous experience with using a guitar, and notably had the highest mistuning of all the subjects in this experiment. It is also worth noting that many of the strings, particularly the high E string, the B string, and the G string, were extremely unstable and difficult to count, which resulted in less oscillations being used to calculate the frequency. The sigma in this case was about 363 cents.

Participant 5 also had no musical experience, and all of the strings were rather stable, which allowed us to easily and accurately count 80 oscillations. However, it is worth noting that this is the only subject who had a prominent outlier, and despite string D having a high mistune and being used to tune string G, the G string was rather accurately tuned. Excluding the outlier, the sigma was about 18 cents.

Figure 9: A situation where counting periods is difficult

With regards to further research ideas, we can automate the period-counting process by using programming methods and Fourier-transformation, since manual counting is tedious to do and it is prone to the uncertainties listed above. This study can also be run with multiple other instruments such as violins and pianos to see if a person’s improvement rate is dependent on the instrument.

In his book[1], Music: A Mathematical Offering, David J. Benson mentions that mistunings of pitch are heard stronger in chords. We would also like to find the limit of allowed mistune before it begins to be audibly heard, this would be another piece of information many performers would find critical to their performances.

Ultimately, it can be concluded from the data that while a person’s experience with music can help improve their abilities, natural talent is still a very large factor. While the best tuner was a professional who had worked in the field, one of the subjects with no musical expertise tuned better than a student who has worked with music for 8 years, despite their disadvantage from lack of experience. As such, a person’s capabilities do not seem to solely rely on experience.

David is a person who likes intellectual work: puzzles, math, research, and basically a bit of everything except for French and Astronomy. If there isn’t anything to do, then he’ll find some work or make up some project that is almost definitely going to take ages to complete.

One thought on “On the Ability to Tune a Guitar.”