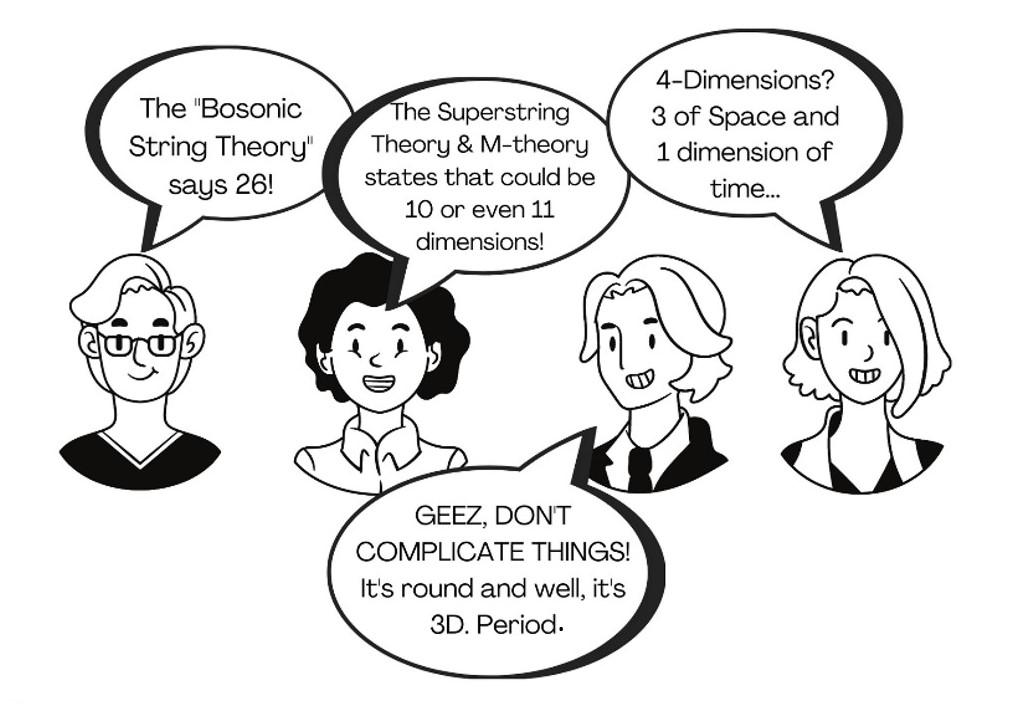 Before unravelling the mysteries of the Universe, it is important for us to know about our origin and our place in this vast domain. We have been walking on this earth for the past three to seven million years and have evolved drastically. The earliest Homo sapiens dispersed out of Africa around 70,000 years ago.[1] It is remarkable how we have evolved from quadrupedal apes to bipeds (i.e., after we transformed into Homo erectus, or the ‘upright man’). From that Eureka moment of discovering fire to the invention of thermonuclear bombs, we have learnt many things and are continuing to metamorphose. Humans have learnt to question things, and their unquenchable thirst for knowledge and trying out new things has led to further discoveries and inventions.

Humans are primates. We have a very close relationship with another group of primates – the apes. But if we are close to the apes, why is it that the apes have not evolved as we have? We need to understand that evolution does not signify progress. It should not be equated to progression. It is about how well an organism can adapt and blend in with its environment. While some primates remained in Africa, the Homo Sapiens decided to venture out. They emigrated to Asia, Europe and finally the Americas (their migration to the Americas was much later). Our origin story is an integral part of who we are, and this series ‘In the Beginning’ would cover various aspects of this story we all are a part of. This article in the series would probe deeper into how the Universe came into being.

The Big Bang & Its Possible Causes

How did the Universe come into existence? Is it possible that something came out of nothing? How did life bloom on our planet? Humans have been cracking their heads on many questions like these for years, and the comical part is that these questions have remained unanswered. Nevertheless, there are legends, stories, and modern theories.

The Māori people of New Zealand believed that there was nothing in the beginning. There was a void of unlimited potential and energy, and they called it Te Kore. Then arose Te Po or ‘The Dark Period’, and this period lasted for aeons. After that, there was light, Te Ao, and finally, the Earth was created. There are many other legends like these, like the legend of Mbombo from Africa.[2]

The latest theory, the Big Bang theory, was a breakthrough as it brought us closer to the answer to the biggest question in the Universe, and the evidence supporting this was comprehensive and plausible. If one needs to create a universe, what do they need? They require an inexplicable amount of energy, space, and of course, matter. It was at that marvellous moment — the Big Bang — that space, time and matter came into existence, out of nothing. How was that possible? Could there be an invisible and mysterious force that caused this? When we trace back to 13.8 billion years ago, i.e., when our Universe was being created, we reach the singularity, a point where all the matter is packed into, and the laws of physics at the singularity seem nonsensical. At this point, we reach an exceedingly high energy of ~1019 GeV per particle at approximately 10-43 seconds after the Big Bang.[3] Scientists are still figuring this problem out; as of now, there are only theories.

Another theory that is also considered involves Quantum Mechanics and space-time. To get to that, we must understand what our Universe looks like. One must have probably heard people saying certain things about the number of dimensions our Universe consists of –

But which one is accurate? Our current assumption is that the Universe has three dimensions of space (the x, y and z axes) and a fourth dimension of time. Together, they are called ‘space-time’.

The concept of space-time cannot be completely explained without mentioning Einstein’s theory of relativity. According to this theory, space is not flat, rigid and absolute; instead, think of it as a fabric that gets curved (or warped) when there is mass. Picture a piece of cloth held neither too tightly nor too loose at the sides by several people. Now, when one places a tennis ball on it, it forms a depression. If the person places a medicine ball (which is much heavier), it creates an even deeper curvature. More the mass, more the warping. Space-time is exactly like this. The mass tells space how to warp, and the warped space tells matter how to move. This description of space-time is just for visualisation purposes. Space-time is much more complex; it is not a tangible, physical thing.

Einstein’s theory is undoubtedly one of the greatest theories in theoretical physics. Its best prediction was the existence of gravitational waves, which was confirmed by LIGO experiments in 2015. Recently, it has become 500 times harder to beat.[5] However, this theory is incomplete. When the rules of quantum mechanics are applied to space-time at the smallest possible scale, it can fluctuate without restraint, even in a vacuum. Due to this, quantum space-time can consist of millions of tiny black holes and baby Universes — ‘foamy’ space-time bubbles — which spontaneously get created from nothing. According to this theory of quantum fluctuations, one of these infinitesimally small bubbles then gave birth to this vast Universe, and the Universe is continuously expanding. This theory also suggests the existence of a multiverse. Imagine thousands of these bubbles evolving into new Universes![6]

On a side note, for the theory of relativity to be complete, it must be unified with Quantum Mechanics. Scientists from one of the latest and most exciting fields of Physics called Quantum Gravity are trying to do exactly this.

This section of the article will cover one of the most famous theories regarding the origin of our Universe — the cosmic inflation theory. The Inflation theory was introduced in 1980 by Alan Guth, Andrei Linde, Paul Steinhardt, and Andy Albrecht, and was used by cosmologists to solve many problems such as the horizon problem, the monopole problem, and the flatness problem.[7]

According to this theory, the infant Universe expanded exponentially fast (at a factor of 1026) for a fraction of a second before the relatively gradual Big Bang expansion. During this process, a cosmological constant-type of vacuum density1 controlled the energy density that produced the matter and radiation we can observe in the Universe today.[7] This theory is considered an extension of the Big Bang theory.

Figure 2: The Chronology of the Metric Expansion of the Universe [NASA/WMAP Science Team]

As mentioned earlier, this theory solves the three problems that the Big Bang theory posed.

The inflation theory solves most of the problems that arise from the Big Bang theory, due to which this theory combined with the Big Bang theory is widely accepted in the scientific world. Together, the inflation and the Big Bang theory link important ideas in modern physics, ranging from symmetry breaking and the foundations for the GUT to cosmology. The theories have laid the bedrock for modern physics and cosmology. It is these theories that have led scientists to hunt for answers regarding the origin of the Universe through experiments such as the ones being conducted in the Large Hadron Collider in Geneva.[12] While the combination of inflation and the Big Bang is widely accepted, some of the creators of the theory such as Paul Steinhardt, are reconsidering this theory as they believe highly improbable conditions are required to start inflation. Inflation was supposed to occur no matter what the initial conditions of the Universe were, however, this has been further analysed and shown to be otherwise. Only a few out of all the ways a universe could have been created would lead to a uniform and nearly flat universe that we see today. Most of these would reach the uniform and nearly flat stage without inflation.[13]

In fact, according to Linde and Guth, inflation could give rise to an infinite number of universes; once inflation starts, it is eternal and would forever form space-time bubbles that can create new universes. Steinhardt, however, is against the idea of a multiverse. He says that a multiverse in which anything can and will happen is a major flaw. He said, ‘what does it mean to predict something if it predicts everything?’ According to him, such a theory cannot be tested and is therefore, not a scientifically useful theory.[14]

Nevertheless, the inflation theory is one of the best theories we have as of now, and all we can do is hope to find a better and possibly empirical piece that could complete the puzzle of the origin of the Universe and possibly other universes, if they exist, in the future. Perhaps, someone among the readers of this article will find a solution in future.

1 The cosmological constant was originally introduced by Einstein as a repulsive force required to keep the Universe in static equilibrium. Currently, it is considered a candidate for dark energy. On the other hand, a vacuum energy density is the net density of a vacuum that would behave like the cosmological constant if it is present. The concept of a vacuum having density arises from quantum mechanics which requires a vacuum to be filled with virtual particle-antiparticle pairs that continuously annihilate each other and produce energy. During the inflationary epoch, a fairly large vacuum energy density existed.

2 A light horizon is the maximum distance from which light from particles could have travelled to an observer.

3 The cosmic microwave background (CMB) consists of the leftover electromagnetic radiation from the Big Bang.

4 The search for a ‘Grand Unified Theory’ is one of the most famous ongoing pursuits in theoretical physics that aims to unify all the four fundamental forces. A system of particles is said to be symmetric if it remains unchanged after a transformation. The simplest example of symmetry in physics in general is the rotation symmetry — when you turn an object 360° about its axis, it stays the same.

5 The density parameter is the ratio of the average density of matter and energy in our Universe to the density at which the Universe would stop expanding only after an infinite time (which is also called critical density).