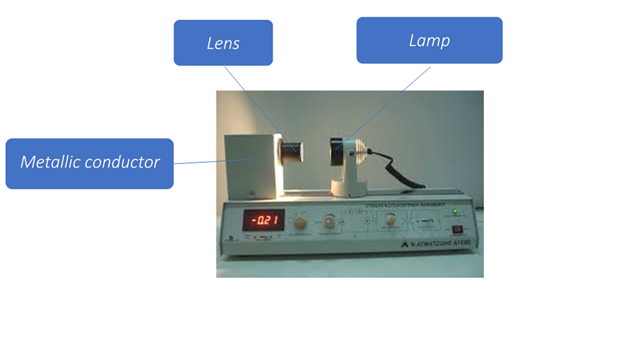 Research was conducted on the phenomenon of the emission of electrons from the surface of certain metals when illuminated by light. The purpose of this work was to observe the change in the value of the electric current produced, depending on the distance between the lamp and the metal conductor in a photoelectric effect apparatus. The experiment was performed in 6 phases. In each of them, the values ​​of the electricity produced were recorded, with a constant decrease in the distance. In each of the 6 phases, a coloured filter was installed on the lens of the device. Altogether, 6 different coloured filters (red, blue, dark yellow, green, light yellow, orange) were used throughout the experiment. The instalment of the filters ensured that the measurements were based on light of different colour, i.e. frequency. In other words, it would be possible to study the interaction between the two variables, based on different controlled variables. The experiment was performed in a dark room and the measurements were recorded using spreadsheet software. The results indicated that, in each of the 6 phases, the electric current changes inversely with distance. Therefore, as the distance decreased, the electric current increased, irrespective of the colour of the filter being installed.

Light has intrigued humans throughout history. Since ancient times, philosophers and naturalists have been trying to understand and interpret the “nature” of light. Prehistoric humans were undoubtedly aware that the Sun and heavenly bodies provided light and that fire was a source of light that could ward off nightly dangers. The study of light has been the focus of the greatest scientific minds over time. Attempts to explain the behaviour of light have led to significant advances in our understanding of physics. Even today, scientists are exploring the branch of quantum physics, dealing with themes ranging from cosmology to chemistry[1]. The photoelectric effect has a fundamental place in quantum physics and has been an important subject of research in that particular field[2]. This phenomenon was noticed in 1887 by the German physicist Heinrich Rudolf Hertz, who was testing Maxwell’s theory of electromagnetic waves. He noticed that a metallic surface could emit electric charges when light of very short wavelength falls on it[1][2]. Later, in the early 20th century, Max Planck (1858-1947), another German physicist, introduced the idea of quantized energy to explain blackbody radiation, thus providing evidence that supported quantum theory. The final interpretation of the photoelectric effect was given by Albert Einstein in 1905, which was based on ideas formulated by Max Planck in 1900. In other words, a big step towards understanding and approximating the photoelectric effect was achieved owing to Plack’s work on quantized energy and quantum theory. Einstein himself, in part of his work, assumed that light consists of quanta of energy, which act in single elementary processes. The light quanta are also called photons. He concluded that the photons under certain conditions give their energy to a corresponding number of electrons. Our measurements are based on the above Einstein model.[4][5][6][7][8]

What is the relationship between the value of the electric current and the distance of the lamp from the conductor to the photoelectric device?

The dependent variable is the value of the current of the electricity produced, which is measured in

According to Albert Einstein, light also has particle-like properties. Einstein’s interpretation of the photoelectric effect using a quantum model provided strong support for the model itself. Furthermore, Einstein’s reasoning supported the new idea that light behaved more like a particle rather than a wave when analysing the photoelectric effect. These massless particles, now called “photons”, were characterized as packets of energy. In particular, a photon can be considered light packaged as a discrete bundle of energy with an amount of energy given by the equation:[7]

(With h being the Planck constant (

For the photoelectric effect to take place, the photon must possess an energy that is equal to or greater than the electron work extraction b, which is essential for the electron to be ejected. The electron, on the other hand, will either take all of the photon’s energy or a part of it. Supposing that the electron takes all the energy of the photon, the value of the threshold frequency

corresponds to the energy of the photon that is just enough to cause the extraction of the electron. That energy is given by the relation:

. In the photoelectric effect, photons striking atoms on a metal surface will cause electrons to be ejected only if the photon has high enough energy. The greater the number of photons that strike the surface at or above the threshold energy, the greater the number of electrons dislodged. The metal atoms will not lose electrons, however, if no individual photon has enough energy to dislodge an electron from an atom. A random photon can give all its energy

Based on the above theory, it was assumed that the value of the intensity of the electric current to be measured will be inversely proportional to the distance of the lamp from the conductor in the photoelectric effect apparatus. To test the case, we run the experiment, which ultimately confirms the original hypothesis.

Measurements of the power intensity in

were recorded after an experiment in a darkroom (to ensure accuracy and reliability) and then placed in price tables on A4 paper. With the use of computer program Microsoft Excel, they were classified into a diagram (table 1). Using the same program, 7 graphs were designed, showing the relationship between the value of the electric current ​​and the distance for each of the coloured filters. Finally, the slope of each graph was calculated.

The errors were evaluated based on the accuracy of the instruments used.

The minimum possible value of the photoelectric effect apparatus’ ammeter. was 0.01, while the ruler incorporated in the device had a millimeter accuracy (mm).

Graph 1.1: Electric current versus distance (without the use of a colored filter)

The above graphs show the variation between the dependent and independent variables of electrical current, I, and lamp-conductor distance, x. Each of the 7 graphs, except for the 1st, refers to a phase of the experiment in which one colored filter was mounted on the lens of the photoelectric device (red, blue, dark yellow, light yellow, green, orange). Only the first graph refers to the phase in which no filter was inserted into the lens of the device.

The credibility of the results can be confirmed since the result obeys Einstein’s model and quantum theory. However, when recording the measurements, it was obvious that the value of the electric current did not change smoothly, i.e. at a constant rate, while the distance was decreasing consistently by 5 cm throughout the experiment. The assumption can be considered to be largely confirmed, but this uneven value variation remains to be explained. This fact indicates the possible existence of an error in the method used.

The reason for this variation could be due to the influence of the small presence of light in the room where the experiment took place. Inevitably, some rays of sunlight would be intruded into the room through the door’s or the window’s gaps. It must be noted that for the photoelectric effect apparatus to function perfectly, apart from the light emitted by the lamp mounted on it, no other light should strike the surface of the conductor, therefore, the above element is likely largely responsible for the uneven change in the value of the current’s power. The experiment could have produced even better results if the photoelectric effect apparatus had been placed in a completely dark room, preferably without any windows or other openings from which sunlight can enter.

The importance of the photoelectric effect is admittedly great. In particular, it’s interpretation by Einstein significantly contributed to the perception of the quantum nature of light. It also provided evidence that supported the quantum theory and the quantization of energy. The results of the particular paper, as proven above are indicative of all the above scientific breakthroughs. The successful materialization of the experiments corroborates Einstein’s model. Furthermore, it demonstrates that for the photoelectric effect to take place, there is only one condition: the frequency of the light, not the distance between a light source and a conductor.

Even though the advancements that have been attained thanks to the photoelectric effect are relatively recent, they apply in various aspects of our life. As a result, further work on this topic could analyse some of the practical applications of the photoelectric effect, such as those regarding solar cells or fibre optics communication. Furthermore, supposing that the same independent variable (distance between the lamp and the conductor) is used, research could include observing the correlation of it with the voltage (i.e. the electric potential difference V), instead of the value of the electric current. It would be possible to conduct research on a topic that examines the similarities or the differences with the theory of blackbody radiation- which too has supported quantum theory.

In summary, research was conducted on the interaction between electric current (which is produced after waves of electromagnetic radiation fall onto the surface of a metallic conductor) and distance (between the conductor and the lamp that transmits the waves). Before the experiment, based on the already existing literature regarding the topic, an assumption was made: there would be an inverse relationship between the dependent and independent variable. This was confirmed quite well by the experiment. Indeed, as proven by all 6 phases of the experiment, irrespective of the colour of the filter, therefore regardless of the frequency of light, when the distance was reduced, the value of the electric current increased.

Thanks must go to Dr. A. Paschos, science teacher of Ionidios Model High School of Piraeus for his valuable help and guidance throughout the materialization of the project.

Konstantinos Angelopoulos (2003-) comes from Piraeus, Greece and attends Ionidios Model High School of Piraeus, one of the 5 Model High Schools in Greece, attendance at which requires successfully passing exams. He graduated from Junior High School with distinction, having acquired a Certificate of Excellence by the Hellenic Ministry of Education, Research and Religious Affairs in every of the 3 grades of Junior High School. Since early age, he has been passionate about social sciences and humanities, yet he is also fascinated by physics. In 2018 and 2019, he won personal awards in the National Student Physics Examination “Aristotle”, organized by the department of physics of Athens University and the Hellenic Physics Association.