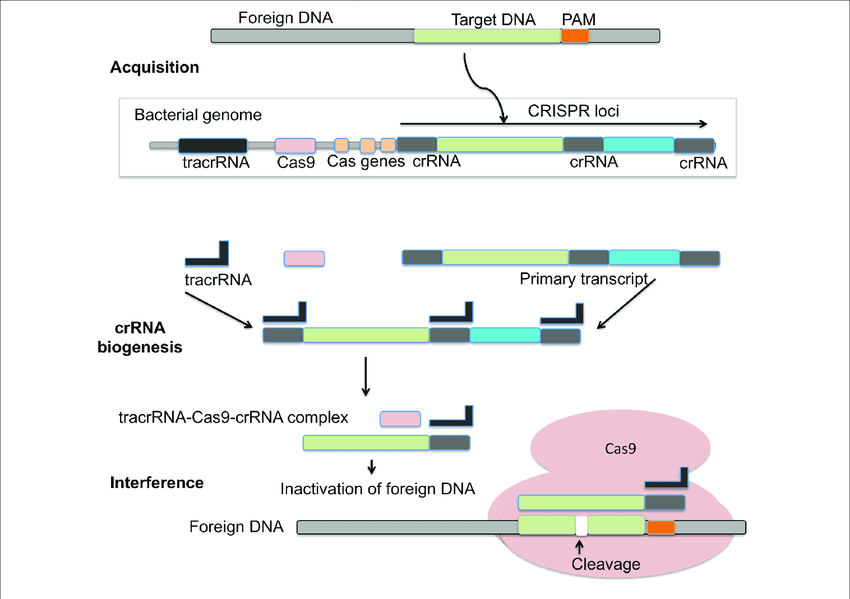 The Nobel Prize in Chemistry for 2020 was, in a historic first, shared by two women: Emmanuelle Charpentier and Jennifer A. Doudna. They have revolutionised the life sciences and opened up avenues for treatment we could scarcely have imagined earlier, all with the gene-editing technology of CRISPR.

CRISPR, shorthand for CRISPR-Cas-9, is often and aptly described as ‘a pair of molecular scissors.’

Clustered Regularly Interspaced Short Palindromic Repeats come from a prokaryotic defence mechanism, that help bacteria and archaea target specific bacteriophages that have attacked the cell. The system can be thought of as maintaining a criminal record, so that suspects can be identified before damage is caused.

The first step is spacer acquisition. A ‘spacer’ is a fragment of foreign DNA. The combined action of the Cas1 and Cas2 proteins removes the spacer from the invading DNA and inserts it into a CRISPR locus. This primary transcript is known as pre-crRNA (CRISPR RNA).

The next step is the biogenesis of fragments of guide crRNA, transcribed from pre-crRNA. Guide crRNA is a sequence of about 20 nucleotides that helps the Cas9 protein with the final stage of the defence mechanism- interference.

When the foreign DNA enters the cell for the second time, Cas9 and crRNA form a complex that destroys the pathogen before it can cause damage. crRNA ‘guides’ Cas9 by telling it the sequence of bases to cleave, and Cas9 cuts the foreign DNA at that specific site.

Here’s the idea that won a Nobel: what if we made our own guide crRNA, and used Cas9 to cut DNA precisely where we needed it?

So what’s all this conversation about?

The debate surrounding CRISPR-Cas9 gained traction in 2018, when Chinese scientist He Jiankui announced that he had implanted two genetically-modified human embryos in a woman’s womb. The event sparked controversy due to an important distinction that we should make- germline vs. somatic gene editing.

Somatic gene editing is editing of living body cells- defective, disease-causing genes can be edited or repressed to reduce the harmful effects it has on the body. The treatment of Severe Combined Immunodeficiency Disease (SCID), for example, can be done via gene therapy. The patient’s haematological stem cells are isolated, and disease-causing mutations are replaced with prepared, healthy replicas. This is done using retrovirus vectors, suitable because of their ability to insert a copy of its genetic material into cells.

Somatic gene editing is a largely accepted and rapidly developing field. Germline editing, however, is where the ethical debate lies- the editing of germ, or reproductive cells- i.e., eggs and sperm.

The heritable aspect of germline editing is a major concern. Gene editing can have unpredictable after-effects on an individual, and these harmful after-effects can get passed on through generations. Many traits are complex, and related to multiple genes and loci. A lot of genes are not yet fully understood. Apart from genes, multiple factors such as the environment could affect how a trait is expressed. Attempting to significantly change any trait would mean attempting to alter each gene that affects that trait, and could have unforeseeable off-target effects. There is also the issue of consent- can a future generation or embryo really ‘consent’ to bearing the aftereffects of a therapy, an altered gene?

The term ‘designer baby’ is often thrown around, and this comes from a second major concern- who decides what genes are worth replacing?

Gene editing for non-therapeutic reasons is a strong possibility, especially once the technology becomes commercially available. The power to alter genomes lies, then, with people who can afford to pay for gene editing and their morality. The flipside to this situation- that is, having strict controls over who can use technology for what purposes- would infringe upon the people’s freedom. People also argue that banning gene editing only pushes people to attempt to get these services illegally, where sensitive and potentially harmful procedures are extremely difficult to control.

Some scientists say that our conversation may be coming too early, and that we are far from designer babies as of now. However, a pre-emptive discussion is always preferable to an attempt to clear up once the use of a technology has gone out of hand. The dilemmas described have no easy answers, and it may be easy to write CRISPR off as dangerous. However, it can do wonders for medical treatment and agriculture at exceptionally low prices. The research potential of CRISPR, too, is enormous- there is much we can learn about the genome through the quick, precise splicing of DNA. Germline editing, too, cannot be written off. Germline Genome Editing can be life-saving- a procedure in the germ cell can reduce chances of developing a particular genetic disease later in life.

Questions about the ethics of gene editing are scary, but vital to talk about. The set-up of universally-accepted (well, mostly, anyway) regulatory framework before the technology is widely and commercially used can play a huge role in preventing the worst consequences of a technology so powerful falling in the wrong hands. All we need to do is sit down, understand the science, and have a little chat- what do you think ought to be done with gene editing?

3 thoughts on “Playing God: The Ethics of Gene Editing”