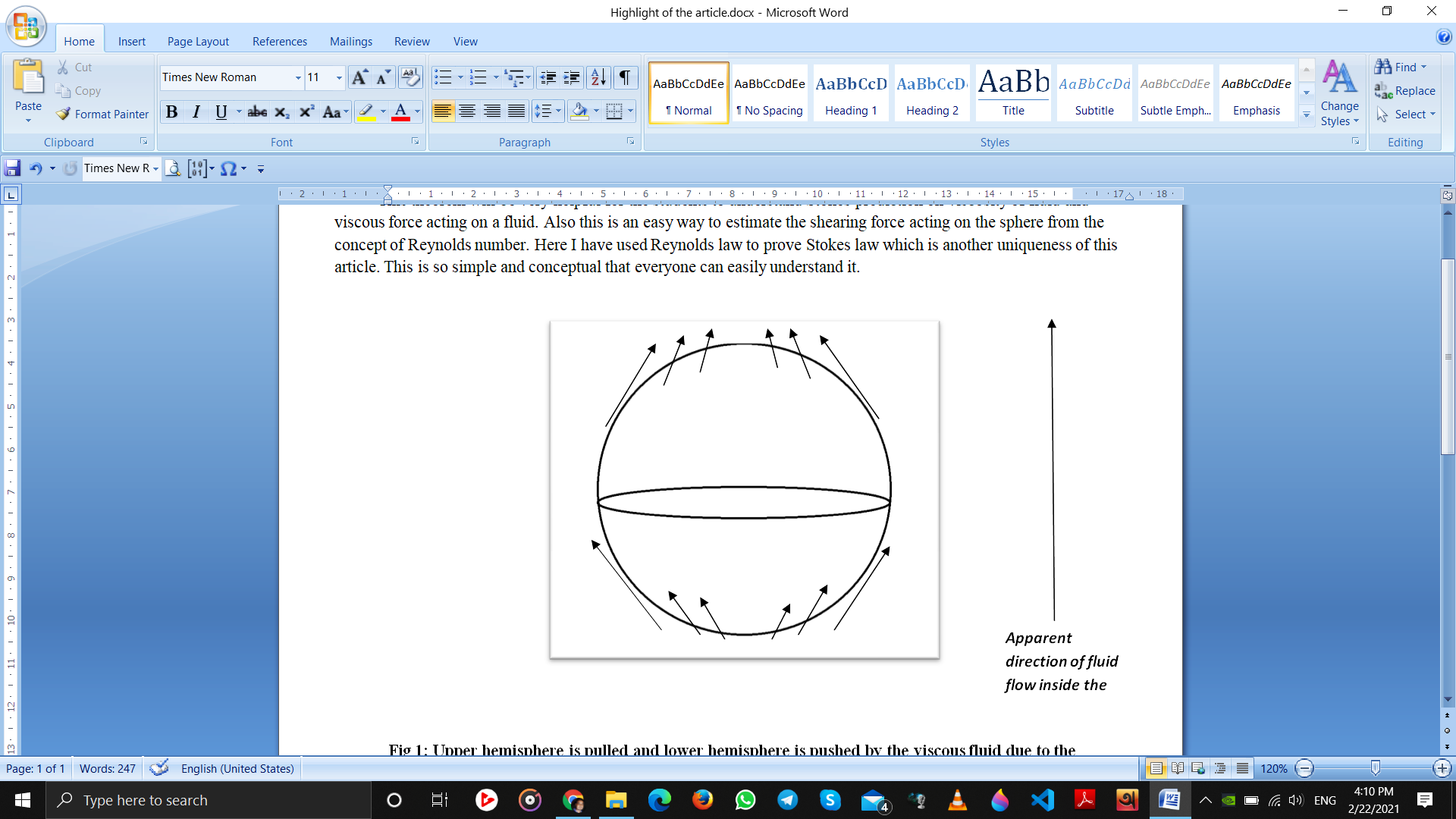 THE UNIVERSITY OF BURDWAN

Viscosity is basically the measure of resistance of a fluid when it is flowing, i.e. it describes the internal friction of a moving fluid. In 1851 scientist George Gabriel Stokes gave his law; after that, a lot of research was done with taking that law into account. But there are no such mathematical solutions to prove this law except by dimensional analysis. Then how to derive it theoretically! So here especially this was thought in a general way so that it can be proved easily. But since it is a general way to prove the shearing term, it is really a new one and also this theorem gives a proof of Stokes’ theorem. Secondly, the law in this article is proved by using the concept of Reynolds law. That is why it will be very easy to co-relate Stokes law and Reynolds law.

This theorem will be very helpful for students to understand Stokes prediction on viscosity of fluid and viscous force acting on a fluid. Also this is an easy way to estimate the shearing force acting on the sphere from the concept of the Reynolds number. Here Reynolds law is used to prove Stokes law which is another uniqueness of this article.

The velocity difference will be found at layer to layer on the hemisphere before achieving the terminal velocity i.e. constant velocity will not be achieved. At that situation the shearing force is going to be calculated.

Terminal velocity is the maximum velocity attainable by an object as it falls through a fluid. It occurs when the sum of the drag force (

) (i.e. the viscous drag) and the buoyancy is equal to the downward force of gravity (

) acting on the object as shown in figure-2. Since the net force on the object is zero, the object has zero acceleration. When it starts to fall through a fluid its velocity gradually increases due to gravity and for the time being the buoyancy is smaller than the gravity. After that this buoyancy will increase gradually to cancel out the gravity. Thus no unbalanced force or acceleration will be present to change the velocity of the ball. Now the ball falls with a constant and maximum velocity, called terminal velocity. This calculation is done in presence of a velocity difference between layer to layer i.e. before achieving the terminal velocity.

Figure-2: Direction of forces acting on the sphere.

Shear forces acting tangentially to a surface of a solid body cause deformation. In contrast to solids that can resist deformation, liquids lack this ability, and flow under the action of the force. When the fluid is in motion, shear stresses are developed due to the particles in the fluid moving relative to one another.

For a fluid flowing in a pipe, fluid velocity will be zero at the pipe wall. Velocity will increase while moving towards the center of the pipe. Shear forces are normally present because adjacent layers of the fluid move with different velocities compared to each other.

Figure-3: Shearing force profile when fluid flows through a pipe.

When a fluid having viscosity coefficient

through a cylindrical pipe of diameter

then we have from Reynolds law

is a constant, called the Reynolds number.

) of a flowing fluid is calculated by multiplying the fluid velocity by the internal pipe diameter (to obtain the inertia force of the fluid) and then dividing the result by the kinematic viscosity (viscous force per unit length).

In case of fluid, when it is in motion shearing force is developed due to the particles in the fluid moving relative to one another. In our case, a spherical ball falling through a viscous fluid contained in a large vessel is equivalent to the motion of fluid through a gap between the sphere and vessel wall.

Consider: a spherical solid ball or a sphere having radius is allowed to drop through a liquid, having viscosity coefficient . Then, for a totally immersed condition when it is moving downward under the influence of gravity, tangential force will act on the surface of that sphere and it is given by the liquid for its viscous nature.

Figure-4: The sphere is falling through the viscous medium

Now for the lower portion of the sphere, we consider a circular elementary ring having radius

be an elementary segment [as shown in figure 4] of the liquid layer, such that the velocity of it at the upper layer is

and at the lower layer is

Since, it is known from the continuity equation: If the cross sectional area is large then the velocity of liquid flow through it is small and reverse is also true.

So we get from the equation of continuity:

So the velocity gradient over this layer must be =

Also if one can stay just on the sphere, then with respect to the frame of sphere, the liquid is flowing just opposite to the motion of the sphere and for the corresponding elementary width

of this liquid layer, it can be supposed that the liquid having a certain viscosity coefficient

will pass through a region having width

with velocity. So, we can apply the Reynolds’ law related to viscosity here.

In this case it will be:

And hence the change in velocity between two layers is given by:

is Reynolds number and

is the density of the fluid medium.

Here the tangential force will act on the layer (at lower hemisphere of the sphere) along upward direction and area of this elementary segment is:

Now, the tangential stress on that elementary segment from Newton’s law of viscosity which is proportional to the velocity gradient

This is the force acting on the sphere along upward direction (as shown in figure-4) at the lower hemisphere.

On the other hand, for the upper portion of the sphere the attractive force will act along upward direction and the effect of this force must change layer to layer when the sphere is falling down through the viscous medium.

Similarly, for this case if we choose an elementary area segment on the upper hemisphere, then effectively we get that the velocity gradient here is actually negative, and it is

. The net force acting (along the upward due to adhesive attraction to the sphere by the liquid layers) on the upper hemisphere is given by:

Now, net force acting on the sphere along upward direction must be

This is the actual effective force acting on the spherical ball;

This is the force acting on the whole spherical ball along the upward direction, when the diameter of the vessel of the liquid is much greater than that of the sphere or spherical ball. Now when the spherical ball achieves terminal velocity then with respect to the reference frame of the ball the fluid moves with the same velocity but opposite in direction. So, the velocity of the fluid can be written as:

Hence, the force will be

Thus, the total force acting on the sphere along the upward direction will be

This is accurate and actual Stokes’ law of viscosity proved using the Reynolds number. For this theorem we get the shear force given by the fluid on a solid sphere when it falls and this technique will help to find out shear forces for other symmetrical shaped bodies, for example: cubic bodies, ellipsoidal bodies etc.

This article is based on my own concept and it is the proof of Stokes law of viscosity by using the concept of Reynolds number. Also shearing force term is proved very easily and it will be very useful for upcoming students.