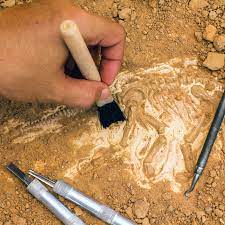 Willard Libby, a professor of chemistry at the University of Chicago, was awarded the Nobel Prize in Chemistry in the year 1960. This Nobel Prize was for the discovery of a technique, Radiocarbon Dating, that revolutionized the field of archaeology and palaeontology1. Radiocarbon Dating is a method used to estimate the age of carbon-containing substances using a radioactive isotope of Carbon, Carbon – 14 which was first discovered in 1940 by Martin Kamen and Samuel Ruben.

Isotopes are atoms of the same element with the same number of protons but different numbers of neutrons(the atomic number remains the same while the atomic mass differs)2. Carbon has three isotopes. C-12, C-13 and C-14. Carbon-12 and carbon-13 are stable, but carbon-14 is not. It is radioactive, and so is called Radiocarbon.

Figure 1- an archaeologist digging up a fossil

How does Carbon-14 form?

Cosmic rays from space constantly hit the Earth’s atmosphere, which consists of mostly Nitrogen. Cosmic rays are high energy particles travelling at relativistic speeds and are made of mostly Hydrogen nuclei and sometimes Helium nuclei(alpha particles)3. When cosmic ray particles hit the Earth’s atmosphere, something really interesting happens. The neutrons in cosmic rays ‘knock off’ a proton from an atom of Nitrogen and take its place. This results in an atom that has a mass number of 14 and an atomic number of 6. So, technically, this isn’t Nitrogen anymore. It’s Carbon-14. After it forms, C-14 and Oxygen combine swiftly to form Carbon monoxide(CO) and later Carbon dioxide (CO2)4.

This radioactive CO2 is absorbed by plants. Plants are eaten by animals. So, Carbon 14 is all around us and also in us. C-14 has a half-life of 5,730 years (one half-life is the time taken for the isotope to decay to half of its original value)

All living life contains the atmospheric level of C-14, as its half-life is pretty big and an organism continues to take in that Carbon and so on. But, when the organism dies, it is cut off from the Carbon cycle and the Carbon 14 in it starts to decay into Nitrogen, electrons and electron antineutrinos5. After 5730 years, it reduces to half the amount and its abundance starts to reduce. By measuring the amount of C-14 present in the sample, it can determine how old the fossil is. That is done by using a technique called Accelerator Mass Spectrometry. Mass spectrometry is a tool that chemists use to identify the ratio of isotopes in a substance. Firstly, the sample is converted to graphite and mounted on an ion source, broken down, and accelerated to very high speeds. Then, the sample is subjected to magnetic fields. The AMS requires a very small quantity of the sample, about 50 mg.6

Carbon dating is of great importance in archaeology. This discovery of Carbon dating has been referred to in archaeology as “The Radiocarbon Revolution”. Before this, archaeologists were unable to predict the ages of organic remains accurately8. However, carbon dating changed the game. Archaeologists are now able to determine the ages of organic remains with high precision. Large domes called tholos in Greece were thought to be older than similar structures in Scotland. This didn’t turn out to be true. Carbon dating showed that the Scottish tombs were millennia older than the Tholos7. This method also made it possible to draw comparisons between ancient societies and study their growth9.

Carbon dating has its limitations. After 50,000 years, very little of the C-14 remains in the organism, making it extremely difficult to date. Carbon dating cannot be used to measure the age of objects older than 60,000 years. Also, the sample being examined can be contaminated by other organic substances in the soil or simply while burying(if buried). The amount of C-14 present in the atmosphere varies. It isn’t the same as a few thousand years ago. Industrial pollutants, nuclear tests etc change the amount of C-1410.

Though Carbon Dating isn’t perfect, it remains the most reliable method to date organic remains currently.

.7.Wood, Rachel. “Explainer: What Is Radiocarbon Dating and How Does It Work?” The Conversation. Accessed April 24, 2021. http://theconversation.com/explainer-what-is-radiocarbon-dating-and-how-does-it-work-9690.

8.the Guardian. “‘Perhaps the Most Important Isotope’: How Carbon-14 Revolutionised Science,” August 10, 2019. http://www.theguardian.com/science/2019/aug/10/most-important-isotope-how-carbon-14-revolutionised-science.