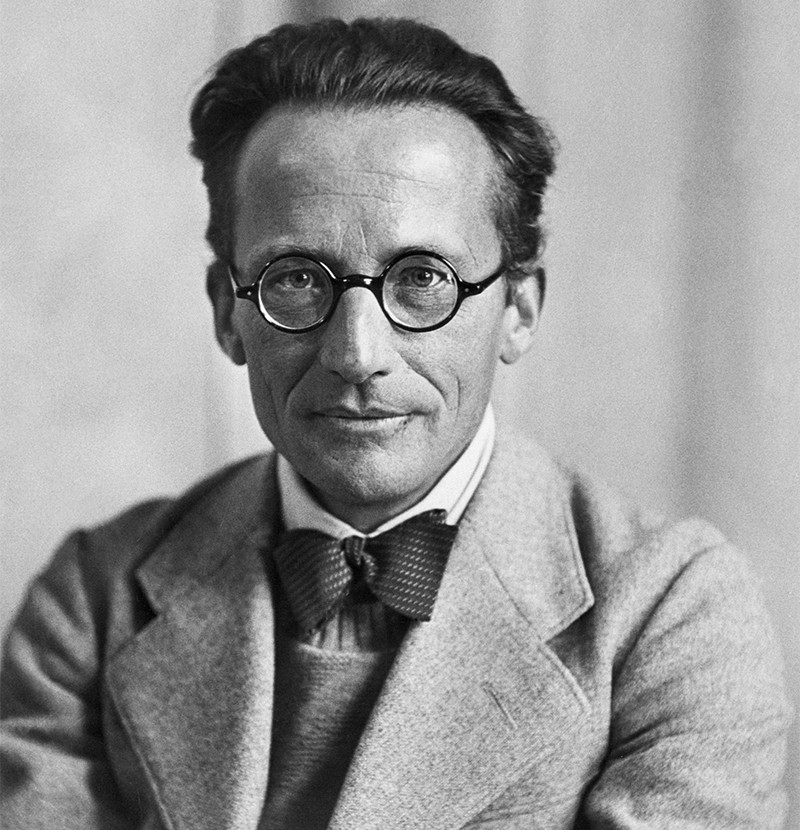 On 12th August 1887, a man who would go on to revolutionize not only the field of physics, but also biology, was born.

From a very young age, Erwin Schrödinger had shown immense talent for mathematics and physics. He also had interests in poetry and philosophy.

Erwin Schrödinger was not happy with Niels Bohr’s old quantum theory. As his background with eigenvalue problems would suggest, he believed that atomic spectra should be determined by some kind of eigenvalue problem.

He came up with an equation which could be used to find the energy states of an atom. The equation describes the Hamiltonian operator, which when operated on an abstract mathematical function called the wave function, produced energy as a result. The energy is an eigenvalue here. The time-dependent version of Schrödinger’s equation also relates the Hamiltonian with time. This equation brought him the 1933 Nobel Prize in physics, along with Paul Dirac[1].

The equation was revolutionary as it solved one of the greatest problems in the quantum-mechanical model of the atom. Schrödinger did not like Heisenberg’s formulation of quantum mechanics – matrix mechanics – since it lacked visualization and was mostly mathematical. Schrödinger was inspired by de Broglie’s idea of wave-particle duality. The solution to Schrödinger’s equation is a wave that describes the quantum aspects of a system. The physical interpretation of this wave remains one of the greatest philosophical problems in modern physics.

The solution of Schrödinger’s equation – the wave function for the system can, using Fourier analysis, be replaced by an infinite series of the wave functions of the individual states, which are natural harmonics of each other. The replacement waves describe the individual states of the quantum system, and their amplitudes give the relative importance of that particular state to the whole system.

Schrödinger’s equation has been universally recognized as one of the greatest achievements of twentieth century science, containing much of physics and in principle, all of chemistry.

Max Born would later discover that in an atom, the square of the wave function gives the probability of finding the electron in that region. This replaced well-defined orbits in the atom with the concept of orbitals. New concepts like hybridization were also discovered. Chemistry, physics and science would never be the same again.

Schrödinger’s theory, known as wave mechanics, also gave a complete description of the spectral lines of the hydrogen atom. (Solving Schrödinger’s equation for atoms of elements with higher atomic numbers, however, is extremely complicated.)

It was widely accepted that matter exhibits both particle and wave properties. However, Schrödinger soon began to suspect this view. He wanted to go back to the classical idea of waves. He started to believe that waves alone can describe everything; particles were useless. Schrödinger proposed that a particle is just a wave group with small dimensions in all directions. However, Hendrik Lorentz pointed out that this wave would spread out with time, and cannot describe particles.

By that time, the widely accepted view held that quantum states exist in a superposition. Everything is thus reduced to probability by quantum mechanics. Schrödinger, however, was dissatisfied with this view. To demonstrate how absurd the idea is, he put forward a thought experiment. A cat is put in a box with a radioactive material and a poison bottle. The latter is connected to a hammer, which in turn is connected with a Geiger counter (a device which can detect radioactive decay). It is set such that if the radioactive substance decays, the hammer breaks the bottle and releases the poison, thus killing the cat. Otherwise, the cat lives. Since radioactive decay is purely probabilistic, quantum mechanics predicts that the cat should live in a superposition of two possible states – dead and alive. How can a cat be dead and alive at the same time? This is Schrödinger’s famous cat paradox.

While Schrödinger believed that this thought experiment would disprove the idea of superposition and probability once and for all, it actually gave rise to many new interpretations of quantum mechanics. The philosophical implications of these interpretations remain a matter of intense debate.

This is known as the measurement problem in quantum mechanics. Hugh Evertt’s many-worlds interpretation holds that, as we open the box to look at the cat, we ourselves become entangled with the system. A version of us in this universe may see the cat alive, while some other version of us in some parallel universe might see a dead cat. Bohr, on the other hand, believed that the wave function of the cat collapses from a superposition of all possible states to a single state on observation. But what counts as observation? If we need an observer to exist in a distinct state, then is there a supreme observer or God? It is difficult to define observation and consciousness from the perspective of physics.

Most of us are of the opinion that consciousness arises from biological interactions in the brain, and is best left to biology. Schrödinger was perhaps the first physicist who seriously took up the challenge of exploring consciousness from the perspective of the physical sciences. Consciousness, for all we know, must be an emergent phenomena – a possible outcome that can be obtained when so many particles interact in some pattern. Schrödinger investigated this thoroughly and published his findings in a short but highly influential book.

The name of the book is a question – and that question is as great a question as has ever confronted humankind. “What is life?” This book inspired Watson and Crick’s work on DNA, which transformed biology and the medical sciences.

Figure 4: “What is life?” by Schrödinger.

In his book, Schrödinger investigated life from the perspective of physics, entropy and statistics. He used quantum theory and quantum jumps to explain mutations and other biological phenomena. Finally, he finished the book with an epilogue on determinism and free will. In the epilogue, Schrödinger put forward his philosophy of oneness. Schrödinger was greatly influenced by the ideas of philosophers such as Baruch Spinoza and Arthur Schopenhauer.

“Quantum physics thus reveals a basic oneness of the universe,” he said. He believed that only one consciousness exists, and we are different manifestations of that same consciousness. He didn’t imply religion or superstition. This view is actually possible under the laws of physics.

“Consciousness is never experienced in the plural, only in the singular,” Schrödinger wrote. “Even in the pathological cases of split consciousness or double personality, the two persons alternate, they are never manifest simultaneously. In a dream we do perform several characters at the same time, but not indiscriminately: we are one of them; in him we act and speak directly, while we often eagerly await answer or response of another person, unaware of the fact that it is we who control his movements and his speech just as much as our own. How does the idea of plurality arise at all? Consciousness finds itself intimately connected with, and dependent on, the physical state of a limited region of matter, the body. Now there is a great plurality of similar bodies. Hence the pluralization of consciousness or minds seems a very suggestive hypothesis… The only possible alternative is simply to keep to the immediate experience that consciousness is a singular of less is never which the plural is unknown; that there is only one thing and even in that what seems to be a plurality is merely a series of different personality aspects of this one thing… each of us has the indisputable impression that the sum total of his own experience and memory forms a unit, quite distinct from that of any other person. He refers to it as ‘I’… ‘I’ is that ground stuff upon which they [the facts little more than a collection of single data (experiences and memories), namely the canvas..] are collected… Yet there has been no intermediate break, no death. And even if a skilled hypnotist succeeded in blotting out entirely all your earlier reminiscences, you would not find that he had killed you. In no case is there a loss of personal existence to deplore. Nor will there ever be.”

According to Schrödinger, consciousness is fundamental and cannot be accounted for in terms of anything else. Schrödinger’s philosophy of oneness is also apparent in his quote: “The world is given to me only once, not one existing and one perceived. Subject and object are only one. The barrier between them cannot be said to have broken down as a result of recent experience in the physical sciences, for this barrier does not exist.”

Another physicist whose beliefs were very similar to Schrodinger’s was Albert Einstein. Einstein and Schrödinger both wanted to find a unified theory of physics, without assuming quantum uncertainty to be true. Einstein spent the last three decades of his life attempting to unify gravity with electromagnetism. Schrödinger worked on the same problem in isolation in the Institute for Advanced Studies in Dublin. He corresponded with Einstein, they supported and at times opposed each other, and both had great insights about unification. However, neither succeeded in reaching their ultimate goal.

Today, the study of chaos theory and fractal geometry has provided us with new insights about the nature of consciousness, which can be an emergent phenomena. Schrödinger, so many years back, had already formed the then-unusual idea that life was both orderly and complex. He saw aperiodicity as the source of life’s special qualities. To quote James Gleick, “In Schrödinger’s day, neither mathematics nor physics provided any genuine support for the idea. There were no tools for analyzing irregularity as a building block of life. Now those tools exist.”

Schrödinger was exceptional in so many ways. He was a great physicist and a great philosopher, responsible for much of the research that goes on in physics today. He still lives among us, with his ideas, his discoveries – and, of course, in the fate of his unfortunate cat.

One thought on “Schrödinger: Equation, Cat and Philosophy”