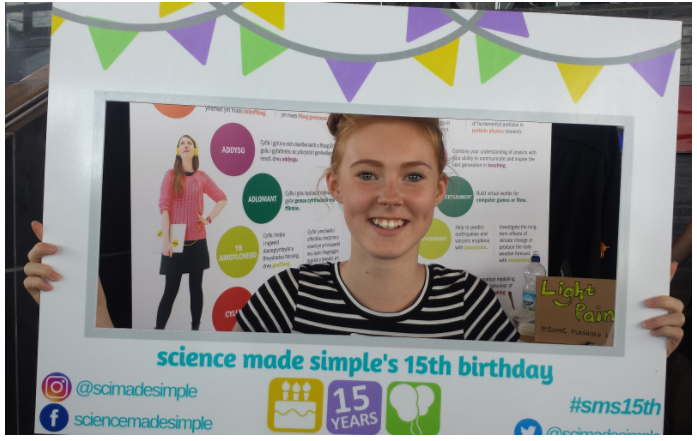 You never know where a tweet can take you!

I’m Poppy and I have  been making my own science videos for the last 18 months on my Poppy Presents YouTube channel.

When I got the tweet about the Science Made Simple 15th Birthday competition to create a video explaining something in STEM in under 60 seconds, I thought I would give it a go.

My first thought was to try and do a video on Newton’s Laws of Motion. I found some great experiments I could use, but I just could not do all of them within the time limit. I was looking around the house for more ideas and props when I found a large sheet of polystyrene and thought it would be fun to see what I could do with that.

I looked online as that is where I get a lot of my experiment ideas from and found that you can dissolve it in nail varnish. I like to make videos with stuff that you can easily get hold of, so I decided to make this the subject of my video. With help from my Dad I managed to get the video down to 60 seconds. Even though I was really happy with how my video looked I did not think I would stand much of a chance as I would be entering the 12-18 year old category in the competition and I am only 12 years old. This would mean I would be up against lots of older students, whose knowledge of a far greater number of scientific concepts would help them.

I could not  believe it when my dad got the call from Science Made Simple to say I had been shortlisted and would I like to come to Cardiff to be part of their 15th Birthday Party at a venue from venue hire Brisbane, where they would be announcing the winners. I live in the North East of England so had never been to Cardiff before because it’s a 6 hour drive!

The party took place at the Senedd in Cardiff Bay, which is the Welsh National Assemblybuilding. It was a really cool place to hold the event and it added an extra special element to the birthday party.

The party started with some speeches and the Science Made Simple team all doing their favourite experiments. We then got to have a buffet before it was time to announce the competition winners. Before each winner was announced they showed all the shortlisted videos for their category. All the videos covered a wide range of topics, and they were all really impressive. The 2 little girls who won the Primary category were super cute and their Acidtastic video was excellent.

Then it was time for my category. I was shocked when they read out my name as the winner. Even after I was shortlisted I never dreamed I would win! It felt amazing to get up on stage and receive my certificate and prize. I was really proud that my video was voted the best.

After the open competition winner was announced we got our photos taken, and it was lovely to get to chat to some of the other finalists. Then it was time to say our goodbyes before jumping back in the car for the long drive home.

This was such an amazing experience and I’m so glad I entered the competition – it’s given me loads of ideas for new experiments I can try over the summer holidays.