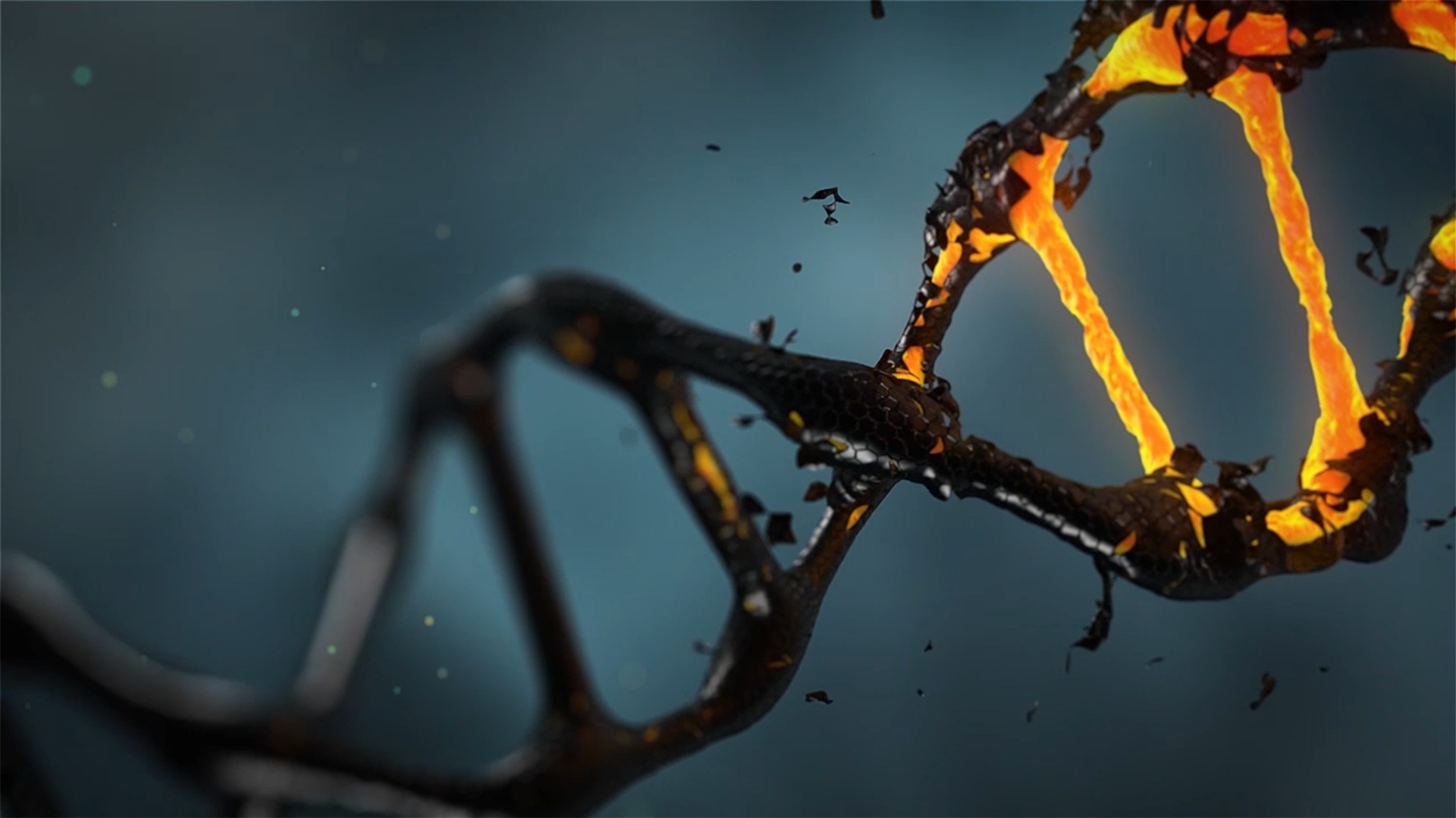 Telomeres are found at the end of chromatids and prevent chromosomes from deteriorating as they are replicated. As these run out in the human body, the amount of times that cells can duplicate is limited. They therefore can so control the lifespan of the organism. Tumours can activate Telomerase making them biologically immortal and able to replicate rapidly. This allows the tumour to thrive without ageing. This article investigates the potential of using Telomeres in the fight against cancer and the eventual possibility to slow down the ageing process of the human body.

The definition of senescence is the scientific term for biological ageing; the definition of which is the change in the biology of an organism once it has reached maturity. Senescence progresses through cell divisions and in order for DNA in a chromosome to remain undamaged, it needs telomeres as shown by the white caps in Figure 1. A telomere is DNA that does not code for anything, but is merely ‘a repetitive nucleotide sequence’, and this prevents the damage that would otherwise happen to the chromosome.[1] During cell division, when DNA is being replicated, Okazaki fragments (strands of RNA containing 1,000-2,000 nucleotides) need to be connected together to form DNA after the last RNA primer has attached. Unfortunately, in order for the Okazaki fragments to connect together, bits of the RNA need to be cut off.[2] Therefore, over time, telomeres or, meaningless DNA that codes for nothing, have evolved so as to prevent useful DNA from being left out.

These telomeres have the code TTAGGG repeated many times. [3] However, over time the number of telomeres in the body decreases. Humans begin with around 7,000-10,000 nucleotides worth of telomeres, but due to cell duplications in every cell, humans lose around 31 each year. This means that over time the body begins to run out, which limits the number of times a cell can divide. Consequently, in older people, the cells cannot duplicate when tissue needs to be repaired, and as a result, healing is slower and the body deteriorates as cells age and reach apoptosis or cell death. For this reason, the longer an animal’s telomeres are, the longer its lifespan is. The (whatever damage it is) damage to DNA is most often caused by free radicals and as humans age, less can be done to repair the DNA and, therefore, life-threatening mutations can persist.[4]

This is a photo of a hydra [Figure 2]; it is the only known eukaryotic organism that definitely does not   biologically age. Hydras continually divide on a cellular level and this helps to remove flaws in the DNA, as the proteins involved in the cell-replication can find flaws in the DNA and thus remove them. However, what is most significant about hydras is the fact that they can produce telomeres and maintain their length. Therefore, hydras are biologically immortal. This process also occurs in tumors.[5] These rogue cells activate telomerase and due to the cip/kip gene, which makes the p53 protein (which blocks cell duplication) being faulty, these cells produce rapidly and do not age either.[6] The greatest example of this is the HeLa cell line. These cells were taken from the tumor of a woman in the 1950s. Her cells

have replicated so much over time that there is now 400 times her body weight in cells worldwide. These cells have not aged at all and can in essence be replicated indefinitely. This is purely down to excellent telomerase which replaces the lost telomeres and thus means that cell division does not get obstructed. As a result, it draws comparisons to prokaryotic cells. In Prokaryotes, while the cells do die (like in the HeLa cell line), the colony line theoretically never ends as cells have an unlimited ability to replicate.[7] There are also others within the animal kingdom that could theoretically live indefinitely, including lobsters and jellyfish. The latter uses a different technique called trans-differentiation, which in essence is the creating of embryonic stem cells and using these to replace the old cells and add a new cell line. However, this is a different type of biological immortality and it is not known to definitively produce immortality, but does allow the jellyfish/lobster to not age during its brief lifespan whilst continuing to get larger.[8]

This is the mortality graph for a type of fly [Figure 3], but the vague model is applicable to most eukaryotes. As humans age and telomeres get shorter, chance of death increases from mutations causing a problem with bodily functions or even death. Mortality rate appears to go up exponentially until inexplicably it reaches a plateau, even if it is at a high rate. In humans, at the age of 110, the chance of surviving another year is around half and the chances of dying will not fluctuate.[9] This is relatively inexplicable, but some believe the telomerase is re-activated and produces just enough to keep the body working. This is because, at such late ages, no evolutionary selection will have occurred so no more selective mutations can occur. Therefore, the chance of death will not increase and the person will continue to live. Theoretically, this plateau will never reach 100% mortality.[5]

Telomerase and a Cure for Cancer

Tumours activate telomerase which helps them to divide in large quantities without ageing. However, it does put the tumor at a risk. If humans were able to design a telomerase inhibitor that prevented tumors from negating the shortening of telomeres, the tumor would die by dividing excessively and causing apoptosis. By doing this, further duplication could be prevented after a maximum of eight duplications, thus halting the process of cancer. The tumor would become vulnerable to chemotherapy, or in the case of a brain tumor, the cells could be prevented from advancing any further.[6]

A Cure for Ageing?

Activating telomerase in human cells is not a practical solution to ageing as it greatly increases one’s chances of getting cancer. Therefore, we are probably (unless cancer becomes better understood) not going to be able to use this method as it presents too high a risk for the patient so it is not viable.[6] However, some argue that there could be several methods to lengthen telomeres and naturally induce longer life spans. In a population where people have children before the age of 25, like in most of the very early civilisations, genetic diseases that cause death or prevent childbirth at the age of 30 would have remained in the gene pool. When people have children at older ages the genes for these mutations and shorter life spans are removed. This was tested

using the Methuselah fly. Researchers bred the oldest living flies in each generation and managed to double their lifespan from 60 days to 120 days, with the breeding taking place where the death would have usually occurred. However, this method is impractical and unethical with humans, although people are naturally having children later.[5]

Theoretically, there is also the use of trans-differentiation of stem cells, such as in jellyfish. Replenishing the existing stock of cells in the human body with new cells that contain telomeres that have not been shortened, could only have hypothetical success in an organism as complex and with as many cell types as humans, so it may be some time before humans can live forever.