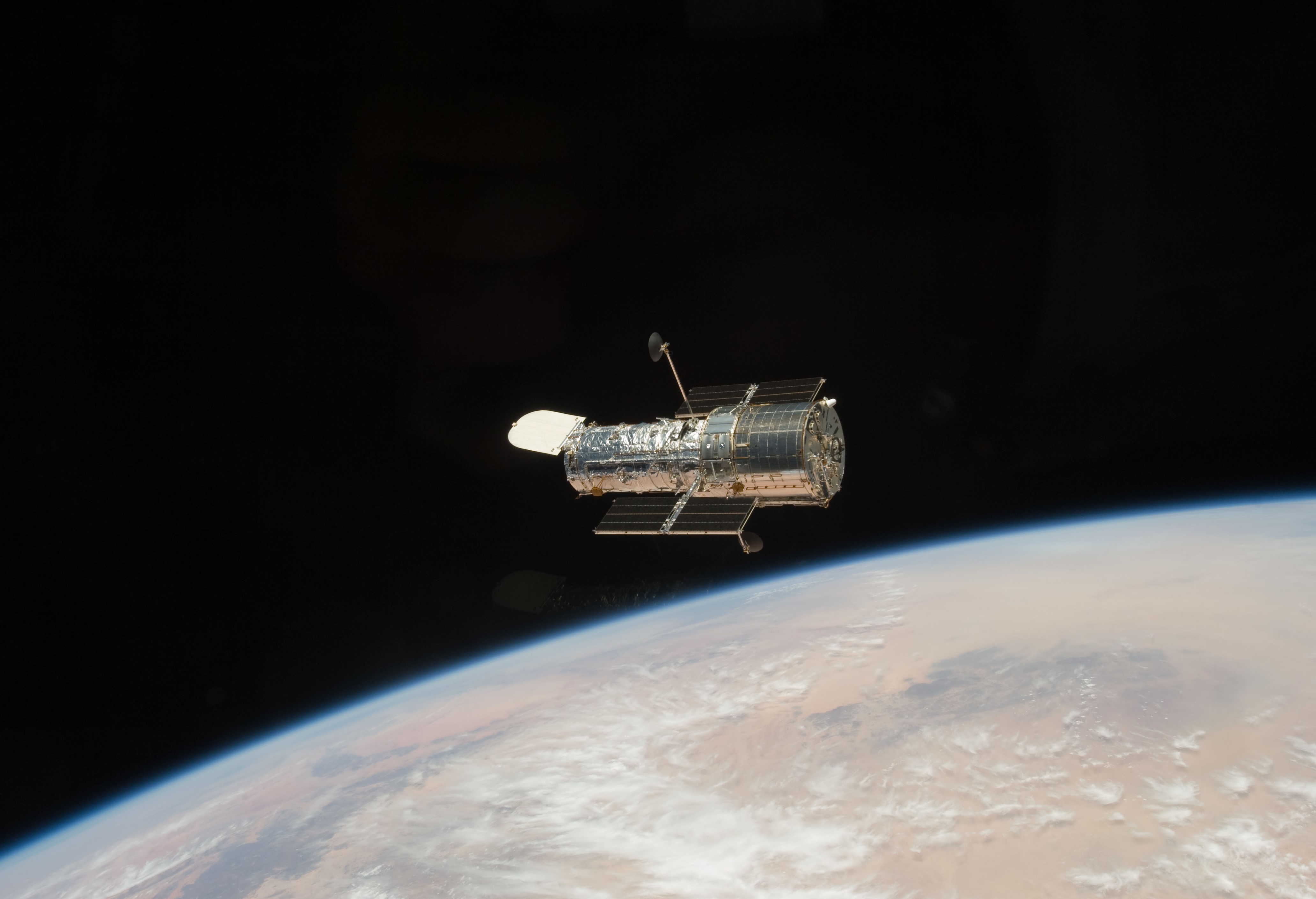 On July 20th, 1969, a scientific breakthrough was made.  Neil Armstrong became the first human to ever set foot on Earth’s only Moon.  Ever since this remarkable day, his famous words “that’s one small step for man, one giant leap for mankind” have been memorialised.  According to the Guardian, in that year alone, the total US federation spending was 178,134 million dollars. In 2015, this number was estimated to be 4,385,531 million dollars.[1]  Evidently, an enormous amount of money is spent on space exploration each year, yet simultaneously there are vital humanitarian problems occurring on our planet.  Should such a vast amount of money be spent on space exploration as opposed to helping the millions of people in need?

billions of galaxies besides the Milky Way (prior to this it was believed that the Milky Way was the only galaxy in the Universe), the galaxies all moving away from each other.  In 1929, he published his findings, concluding that the universe is expanding.[2]  Almost four decades after his death in 1953, NASA named the Hubble Space Telescope in honour of one of the most important astronomers of all time.  This telescope has provided a great deal of scientific data and extremely detailed images of faraway galaxies.  We now know that there are at least 10 trillion planetary systems in the known universe; Earth is just one of them.[3]

Though space exploration may seem needless and unnecessary given the humanitarian problems Earth is facing in this current moment, we must simply put our place in the universe into perspective.  There is so much that is unknown about the world we live in, and space exploration is the key to finding out more about our existence. With at least 200 billion galaxies in the universe, many scientists believe that there must be intelligent life elsewhere in our universe.  In fact, the odds that there is only intelligent life on Earth are about one in 10 billion trillion.[4]

Utilitarianism is a philosophy which states that morality is about maximising utility for the majority of the society.  18th century English philosopher, Jeremy Bentham, argued that, “the greatest happiness of the greatest number is the foundation of morals and legislation”.[5]  Nearly half of the world’s population are living on less than $2.50 a day, and concurrently, millions of pounds are being spent on further space exploration.[6]  If anything, shouldn’t we be cutting this amount?  People who believe in utilitarianism will argue that everyone should have the equal opportunity to live a happy and healthy life.  Therefore, because such a large number of people are suffering, we must make it our number one priority to save them. Arguably, space exploration will not benefit the millions and millions of people living in corrupt areas, unable to read and write, let alone understand this information.  Space exploration is not necessarily something that we need right now. However, poverty is a contemporary issue.  In fact, according to UNICEF, 22,000 children die each day due to poverty.  Another disturbing statistic is that malaria, an easily curable disease, kills one child every 30 seconds.[7]  This means that 4 children have died since the beginning of this article.  Artemisinin-based combination therapies (ACTs) are an extremely effective treatment, formed by combining artemisinin-based compounds with other antimalarials; an adult dose costs less than a dollar.[8]  Shouldn’t wealthier countries be sending aid to low income countries, rather than spending millions on space exploration, when such a large number of people are dying from such curable diseases?

Overpopulation has been a concern for several years due to the rapid population increase that Earth has experienced.  It is predicted that by 2050, the world’s population will be 9 billion; many scientists believe, however, that Earth can carry a maximum of 9 billion to 10 billion people, based on limited availability of freshwater and constrained food supplies.[9]  Despite this, it is not certain exactly how many people Earth can sustain as figures are constantly changing.  The human race is expanding and eventually, planet Earth will simply not be big enough. To overcome this problem, one solution is to colonise another planet, which would involve spending even more money on space exploration.  NASA is currently planning the colonisation of Mars, aiming to send humans to the planet in the 2030s. If the mission is successful, this could change the world as we know it. During a public lecture at the London Science Museum, Stephen Hawking argued that space colonisation will act as a ‘life insurance’ for the human species.  With human conflict and weapons such as nuclear bombs threatening the future of the human race, Hawking claimed we must colonise planets.[10]  There are estimated to be 20,500 nuclear warheads in the world today, enough to destroy the entire earth.[11]  This is a huge concern to the human race and therefore, arguably, we must colonise planets in order to gain greater world security.

Despite the modern form of humans evolving about 200,000 years ago, there is still so much that is unknown about Earth and it has not fully been explored yet.  According to National Geographic, around 1.2 million species are known to science and a new study predicts that there are 8.7 million species living on our planet.[12]  This means that we have a record of just fourteen percent of the species currently living on Earth.  Billions of pounds have been spent on space exploration, whereas it could be far more valuable to spend more money on the exploration of our own planet.  For example, approximately 71 percent of the Earth’s surface is covered by water, yet scientists know very little about the oceans. In fact, to this date man has only explored 5% of the oceans.[13]  Oceans are incredibly important to our planet.  They provide jobs and seafood, regulate Earth’s temperature and produce more than half of the Earth’s oxygen whilst absorbing carbon from the atmosphere.  Shouldn’t we be spending more money on exploring the remaining 95% of ocean that is right here on our own blue planet?

For 160 million years, the Earth was ruled by dinosaurs.  The most common theory for the mass extinction is that a large asteroid struck the Earth.  It is then believed that the atmospheric matter blocked out the sun creating a nuclear winter which wiped out the plants, then the plant-eaters and eventually the meat-eaters.  Because of this, there is a fear that this could happen again and wipe out the entire human species. It is therefore important that scientists monitor asteroids which pose a threat to Earth.  Asteroids are essentially the remains of the material which formed the solar system, around 4.5 billion years ago. They vary hugely in size, the largest being about 583 miles in diameter, compared to the smallest having roughly a 2 meter diameter.[14]  Radar is a vital tool which detects and monitors potential asteroid hazards.  It works by reflecting transmitted signals off of objects, allowing scientists to learn a great deal about an asteroid’s orbit, size and rotation.

Several missions have flown to asteroids, allowing scientists to gain a greater insight into how the solar system

formed.  For example, in September 2007, NASA launched a mission, Dawn, to study the two largest objects in the asteroid belt, Vesta and Ceres.  The mission provided data on the role of size and water in the evolution of the planets and as a result hugely helps in NASA’s goal of understanding the origins of our solar system.  Ultimately, exploring asteroids can be hugely beneficial, mitigating the risk of a large asteroid hitting Earth and also helping us to understand more about the origins of the solar system.

To summarise, the arguments in support of more money being spent on space exploration are persuasive.  It is certainly true that further space exploration would bring many advantages; for example providing answers to the many questions we have surrounding our existence.  Are we alone in this universe? How did life begin? Why exactly did the dinosaurs become extinct? Is time travel possible? All part of the endless list of questions that comes with human curiosity.  Furthermore, it allows us to challenge the boundaries of what is known about the world we live in. Nevertheless, with such significant humanitarian issues occurring on our planet, more attention must be paid to these issues.  It is time to put an end to world problems like poverty. Even a fraction of the money spent annually on space exploration could save millions of people in poverty-stricken countries, and improve living conditions for future generations.  The foundations of the world we live in are largely based on science and it is indeed vital to extend our knowledge of the universe.  However, space exploration is not something we need in this very moment. We must prioritise the needs of our human race and only wholly concentrate on space exploration once there is a large improvement in the humanitarian issues Earth is currently facing.

Alina is a 16 year old student in London. Her favourite subjects include biology, chemistry and maths. She participates in school sports such as netball, hockey and tennis, and is playing tennis at county level.

3 thoughts on “Should more money be spent on space exploration rather than to solve humanitarian problems on Earth?”