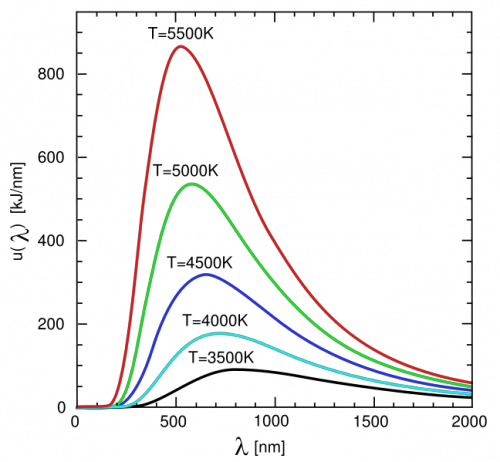 Stars are often described in terms of their colour. Sentences like “Betelguese is a Red Supergiant” and “The Sun is a Yellow Dwarf” paint an image, but there is also a great deal of physics behind them.

Stars emit light in a way similar to black bodies. The wavelength of electromagnetic radiation that a star emits is therefore linked to its temperature. The colour of a star is represented by a quantity known as its Colour Index, which is calculated by finding the difference between the magnitudes of a star in two different wavebands. A star’s colour also plays an important role in stellar classification. Based on their colour and temperature, stars are classed into one of seven Spectral classes which are broken down further on the basis of the star’s size and luminosity.

Colour is, therefore, an important property for stars. The emission of radiation in a star, and therefore what colour it is, the concept of a colour index, and how a star’s colour is used to classify them will be discussed in further detail over the course of this article.

Colour is a quality by which we describe any physical object we observe. Stars are no different. Although it’s sometimes difficult to see, stars have colours. This is more obvious with brighter stars, such as Betelguese or Rigel, which both belong to the Orion constellation. Betelguese appears reddish while Rigel appears pale blue. Sure enough, both stars are classified as Red and Blue Supergiants respectively.

While the colours we see on observing them work well enough to provide a simple description, colour is a quantitative property in physics. The colour of a body generally refers to the wavelength of visible light it gives off through reflection or emission. Stars, however, give off electromagnetic radiation through a wide range of wavelengths, in a manner similar to blackbody radiation.

All objects with a temperature above 0 Kelvin emit some form of electromagnetic radiation. Humans, for example, are too cold to emit visible radiation but do glow in the infrared spectrum, which is why they can be detected using infrared cameras in the dark. In physics, we often use ideal systems to explain phenomena. For radiation, such an object is known as a blackbody.

Blackbodies have the following properties:

These properties are illustrated on the following graph:

Of course, such objects do not exist in real life, but stars are close enough that we often assume them to be blackbodies. Stars emit electromagnetic radiation over a number of wavelengths but the “peak” wavelength determines their overall “colour”. Since the peak wavelength for a specific temperature remains constant, the temperature can be calculated using the principles of blackbody radiation.

A Colour Index (CI) is defined as the difference between two measurements of stellar magnitude made at different wavelengths. Generally, the two filters used to make measurements are Blue (B) and Visual (V) filters. The waveband produced through a Blue filter peaks around the wavelength of blue light, while the waveband produced through a Visual filter peaks in the middle of the visual spectrum, i.e. between the wavelengths of yellow and green light.

Like any field in science, classification makes the study of astronomy a more organised one. The colour of a star plays an important role in categorising stars. Based on what wavelengths of electromagnetic radiation stars give off, their temperatures can be determined. In the Harvard Spectral Classification, stars are divided into any one of the following seven spectral classes, arranged from hottest to coolest: O, B, A, F, G, K, M.

The Spectral Class of a star can be broken down further into a number of subclasses based on the Morgan-Keenan system, which also takes into account the size and luminosity of a star.

It is easy to conclude from the above data that the colour of a star is a very significant quantity in the field of stellar physics, and unsurprisingly so. One of the key features of a star is that they are large bodies that emit light. It seems obvious that the wavelength of the light they emit is important.

Quantitative significance aside, the colours of stars make them more fascinating in general. They add character, and allow us to ask the questions that have allowed us to pursue and achieve the understanding we have of stars today: Why do these dots appear different from each other? What do those differences mean?

4 thoughts on “Stars and their Colours”