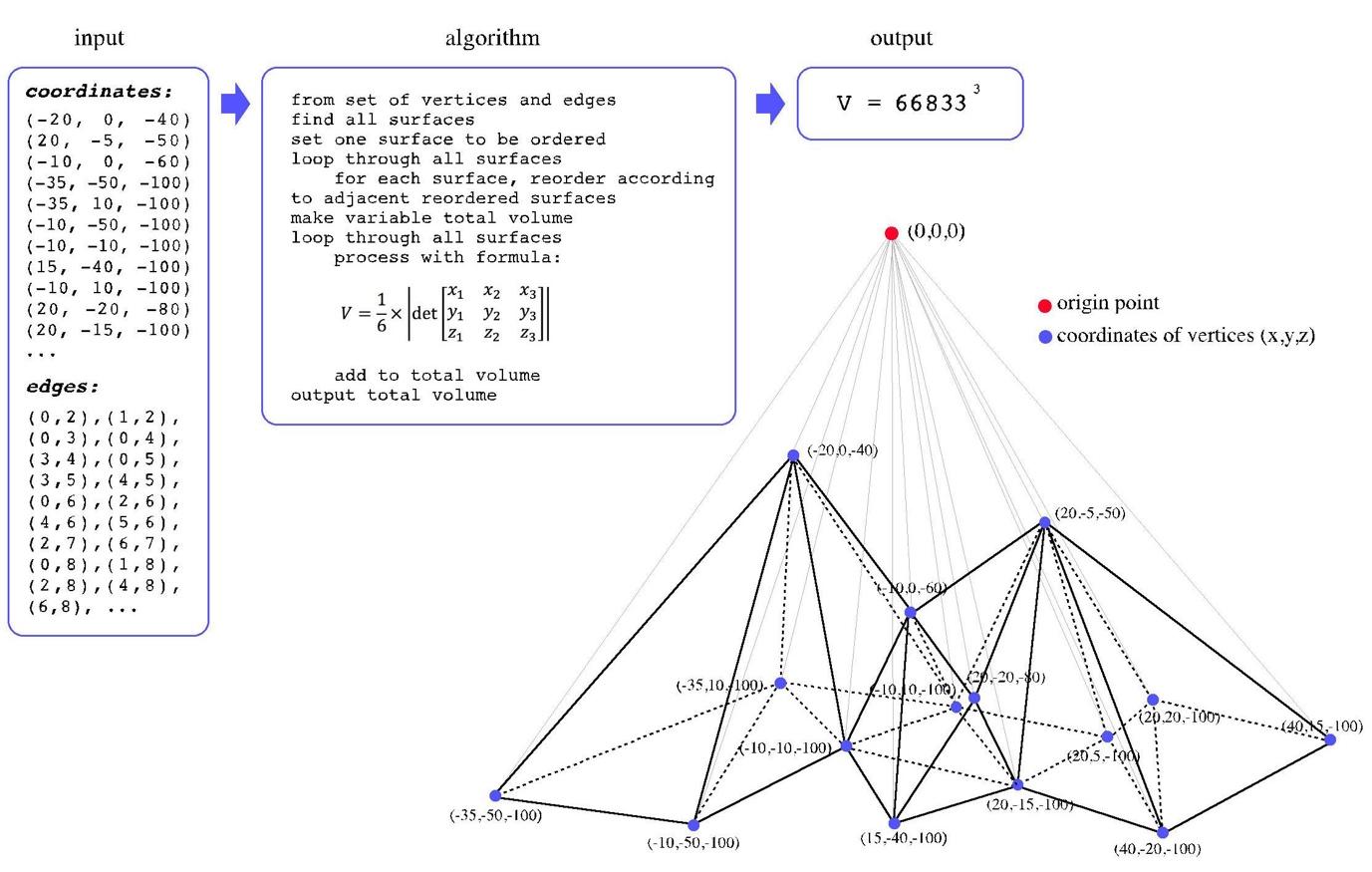 Calculating the volume of regular and irregular solids is an important task in nearly all branches of science including Engineering, Mathematics, Computer Science, and Bioinformatics, and other real world applications, such as volumetric estimation in coal reserve,[1] volume of dam design in a valley, volume of volcano on Mars, or estimating the volume of a tumour.[2]

This research takes The Shoelace Formula (also known as Surveyor’s area formula) — a formula to find the area of a polygon in 2D (Braden, 1986)[3] — and modified it to work in 3D. This new formula has been mathematically proven and tested with a calculation of different kinds of shapes using a computer program. This method breaks apart the polyhedron into triangular pyramids known as tetrahedra (Figure 1), hence its name — Tetrahedral Shoelace Method.

It can be concluded that this method can calculate volumes of any polyhedron without error and any solid regardless of their complex shape via a polyhedral approximation.

Since the story about Archimedes and the famous “Eureka”, many methods of obtaining volume have been found such as water displacement, convex polyhedron[4] [5] volume formula — dividing polyhedra[6] into pyramids, integration — slicing the polyhedron into thin slices and calculating the area of each slice, and solving by parts — partitioning the polyhedra into simpler shapes. All those methods have some limitations. Water displacement method is inefficient because it requires a lot of water for big objects. Moreover, it is required that the object is physical. Convex polyhedron volume calculating method does not work with every non-convex shape as some pyramids may overlap one another resulting in a miscalculation. Integration method works really fast for functions with an easily integrable function that defines it, but most shapes aren’t defined by a function that can be integrated this way. All these methods have their own limitations shown in the table (Figure 2).

The shoelace formula (also known as the surveyor’s area formula) is a formula that can calculate the area of any polygon, given the cartesian coordinates (x, y) of each vertex.

The method used to obtain the formula from the Shoelace Formula (in 2D) to compute volumes of 3D objects is mathematical deduction and reasoning. The process of proving is in the branch of Mathematics: Linear Algebra. After the formula has been obtained and proven, volumes of various simple shapes are calculated with their respective formulas and the formula obtained. Some calculations are done with the help of a computer program to speed up the process.

The Shoelace formula states that given any polygon, we have:

are vectors of the parallelogram. Or alternatively

are vectors of the parallelepiped. Or alternatively

Given a triangle of coordinates,, and, the area calculated by the Shoelace Formula is

We can express any polygon as tessellating triangles by triangulation, where the points are all listed in the same rotational direction (counter-clockwise).

), leaving only the determinants whose corresponding triangles’ areas are calculated by the Shoelace Formula.

Given a tetrahedron of coordinates ,,, and , the volume calculated by the Tetrahedral Shoelace Formula is

Unlike in 2 dimensions, proving that we can express any polyhedron as tessellating tetrahedra is much harder since there exists polyhedra which can’t be tetrahedralized without the introduction of Steiner vertices (additional points that aid in tetrahedralization). This can, however, be done by a method similar to triangulation by trapezoidal decomposition. If we cut a given polyhedron by every plane passing through a vertex of the polyhedron that contains a line parallel to an axis, every piece is a convex polyhedron, which can always be tetrahedralized (note that partitioning is only necessary for the proof and not the actual algorithm). The points of each tetrahedron such that its vertices are all listed in the same rotational direction (Figure 4).

Figure 4: Polyhedra partitioned to tetrahedra (not using the partitioning method described above)

), leaving only the surfaces whose corresponding tetrahedra’s volumes are calculated by the Tetrahedral Shoelace Formula.

Figure 5: The cancellation of volumes calculated by the determinants

,, and are the coordinates of the vertices of a triangular surface

Ptet are the positive determinants, representing surfaces facing in at the origin

Ntet are the negative determinants, representing surfaces facing out from the origin

Finding orientation of other faces from edges we get:

Calculation with the standard formula:

It can be seen that the results match.

Finding orientation of other faces from edges of the first face we get:

Finding orientation of other faces from edges of the second group, we get:

(This can be obtained by considering that directed edges: 1->5 and 5->2 (and 2 others) cannot be used again)

Calculation with the standard formula:

It can be seen that the results match.

The Tetrahedral Shoelace Method can calculate the volume of any irregular solid by making a polyhedral approximation and calculate that shape’s volume. For higher accuracy, more vertex coordinates are required. This method certainly has its own limitations (e.g. this method is cumbersome to use without computer assistance) and when other methods are more practical, they may be used.

It can be observed that for polyhedral shapes from a cube to a toroidal polyhedron, the program gives correct results. However, calculating the volume of a shape with curvature gives inaccurate results. This is because the program calculates the volume of the polyhedral approximation for the curved surfaces.

It can also be seen (Figure 10) that despite the inaccuracy, a polyhedral approximation used by our program is more accurate than a hexahedral mesh used by numerical integration method, the method typically used for similar scenarios.

This method can be used to calculate the volume of abstract models such as the needed amount of concrete to build a building with an irregular shape. This method can also be implemented in higher dimensional spaces, calculating volumes of polytopes — higher-dimensional counterparts of polyhedra.

This method only works when the vertex coordinates (and edges) of a given shape’s polyhedral approximation are known. Higher Accuracy requires more vertex coordinates. The program used to implement such a method is not as efficient as numerical integration in terms of memory complexity.

Code in C++ and some input file examples from this research can be found here: http://bit.ly/TSMprogram

Nicholas Patrick is a high school student from SMA Cita Hati, Surabaya, Indonesia who enjoys joining Math Olympiads since he was 10 years old. This research was started in mid 2017 and made it as regional finalist in Google Science Fair 2019. Another research competition he joined included ICYS 2017 (International Conference for Young Scientists) Stuttgart, which got the best presentation award.