The Higgs boson is a result of the quantum excitation of the Higgs field, which, by interacting with the W and Z bosons (elementary particles carrying the weak force), gives them their mass [1]. This is called the Higgs mechanism. It was first proposed when, over half a century ago, three different research teams were trying to fix an issue relating to the unified theory of two out of the four fundamental forces: the weak force responsible for the interaction between subatomic particles and electromagnetism responsible for the electric and magnetic fields. In this unified theory, gauge bosons (force-carrying particles) emerged without mass. This is true for photons, which carry electromagnetism, and gluons, which carry the strong force (the force binding quarks together), however, the W and Z bosons do have mass. 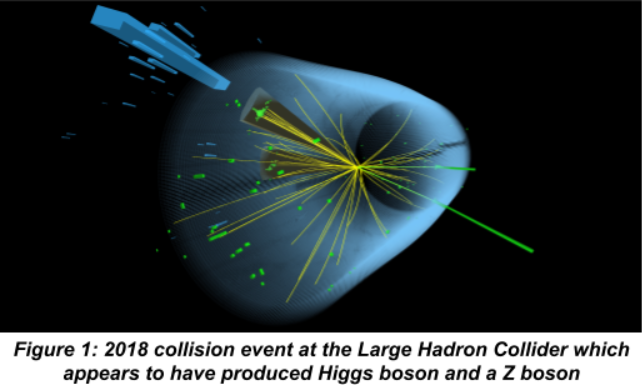 This is why it was necessary to experimentally prove the existence of the Higgs mechanism. If it did not exist, then there must have been something wrong with the Standard Model of particle physics [2]. The Standard Model is essentially a classification of all known elementary particles while including the weak, strong, and electromagnetic forces.

Searches at the European Organization for Nuclear Research (CERN) began in the late 1980s with a particle accelerator known as the Large Electron-Positron Collider [2]. It was dismantled in 2001 to build a new particle accelerator: the Large Hadron Collider (LHC). On the 4th of July 2012, two different collaborations at the LHC (ATLAS and CMS) announced they observed a new particle with a mass of around 125 gigaelectronvolts [1]. Further investigation showed that the newly discovered particle and the Higgs boson had matching properties. Now, the 4th of July is known as Higgs day. The confirmation of the Higgs mechanism has opened up new ideas for research questions in particle physics and cosmology. Physicists are looking into the role the Higgs field and Higgs boson may play in baryon asymmetry, the search for dark matter, the fate of the universe, and the theory of supersymmetry [3, 4].

[4] Gray, Heather, and Bruno Mansoulié. 2018. “The Higgs Boson: The Hunt, The Discovery, The Study And Some Future Perspectives | ATLAS Experiment At CERN”. Atlas.Cern. https://atlas.cern/updates/atlas-feature/higgs-boson.

Hazal Kara is a rising junior at Hisar School in Istanbul, Turkey, and a physics, math, and astrophysics editor at the Young Scientists Journal. She is passionate about science communication and literature. Her hobbies include game development, solving (or trying to solve) math problems, and creative writing. She hopes to become a physicist and writer in the future.