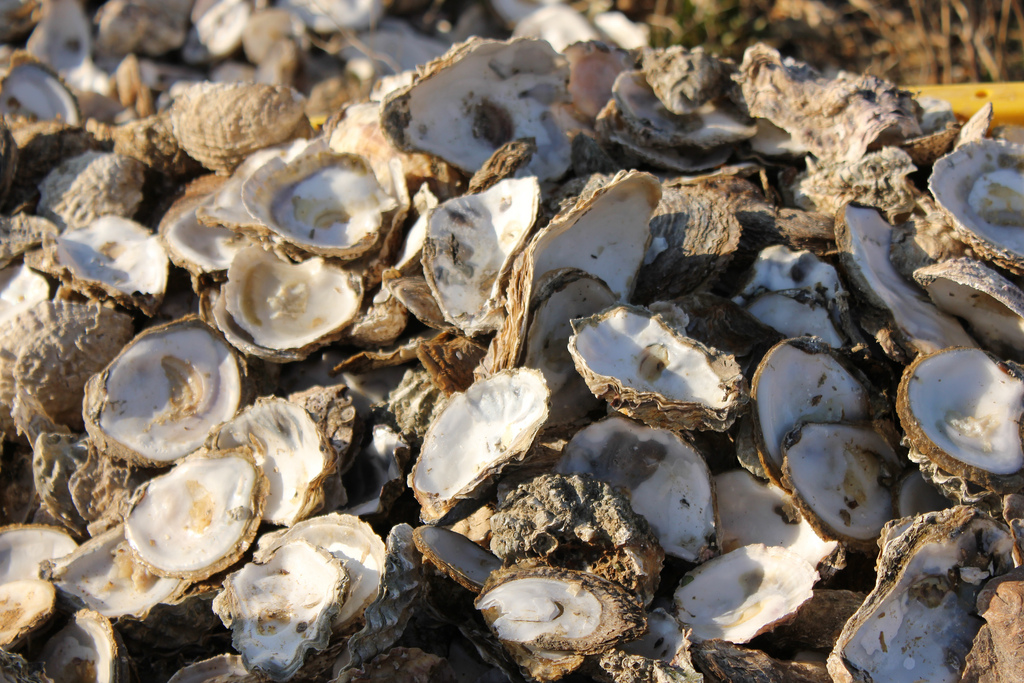 The health of the Chesapeake Bay is steadily declining as pollutants from sources such as road salts, fertilizers, car tires, roofing materials, and car oils continue to pour into its waters.  These pollutants include heavy metals, specifically copper and zinc, and phosphates, which are examined in this experiment. Heavy metals, even at very low concentrations, have been found to accumulate in the food chain and cause serious health hazards, both for humans and the environment.[1]  Excess phosphates create dangerous algal blooms, something currently plaguing the Chesapeake Bay.  Our community is in desperate need of an environmentally friendly and economically feasible way to address this issue.  Currently, there are piles of waste oyster shells and crab shells going unused. Due to their shell structure and content of chitin and calcium carbonate, they have been shown to adsorb heavy metals and phosphates from water.[2]

Adsorption is the process in which an object, the adsorbate, adheres itself to the surface of another object, the adsorbent.  However, all of the current studies on shell adsorption flowed polluted water through the shells at very slow rates. Sometimes, the water would sit in the shells for hours.  The fastest water has flowed through 150 grams of waste shells was a rate of 200 ml per hour.[3]  Unfortunately, this speed is unrealistic for a real-life application.  Instead, this experiment chose to run the 250 ml of polluted water through about 150 grams of waste shells in less than 5 minutes, more than 14 times faster than previous experiments.  By running the water through faster, this experiment assesses the viability of using these shells in the real world. Additionally, although it previously was believed that chitin was the main aspect of shells that helps them adsorb pollutants[4], new research seems to suggest that it may be more than simply chitin such as ion exchange[5] or shell structure.[6]  Thus, this experiment chose to look at crab shells and oyster shells as crab shells contain 27% chitin[7] and oyster shells contain 0.1-1% chitin.[8]  By using these two shells with drastically different chitin content, it can then be determined whether or not chitin is the main component for improving adsorption.  Finally, most current research heats shells >750°C to convert the calcium carbonate (CaCO3) in the shells into calcium oxide (CaO).[9]  However, heating shells to such high temperatures uses a substantial amount of energy and is not as environmentally friendly.  Instead, this experiment examines whether burning shells by heating them at 315°C for one hour could improve reactivity compared to nonheated shells.  This experiment considers three different components: first, can waste shells adsorb pollutants effectively when water is run through them at faster speeds, and, if so, which filter is the most effective?  Second, does heating shells to 315°C improve reactivity? Third, is chitin the main component in shells that help them adsorb pollutants?

Three hundred fresh Crassostrea virginica (eastern oyster) shells and 300 fresh Callinectes sapidus (blue crab) shells were obtained from local restaurants, scrubbed and cleaned with water, and dried outdoors for three months to remove any remaining flesh or algae on the shells.  Half of the oyster shells and half of the crab shells were burned in a kiln for an hour at 315°C (Figure 1).

All of the shells were crushed into a dust-like consistency with a sledge hammer.  Shell dust was poured into PVC pipes 1.9 centimetres in diameter and 30 centimetres in length.  Pipe dimensions were based on those of previous research.[3]  A coffee filter and landscaping fabric were attached at the bottom of the pipe with rubber bands to prevent the shell dust from falling into the collected water.  Ten empty PVC pipes with a coffee filter and landscaping fabric attached at the bottom were used as the control group for the study. The control was established this way to ensure that any removal of pollutants by the coffee filter or landscaping fabric would be the same for all groups and, thus, not impact the results of the study. Wooden test tube racks were constructed to hold the PVC pipes, and glass jars were placed beneath the pipe (Figure 2). 12.5 l of water was polluted with 1 gram of copper sulphate, 1 gram of zinc sulphate, and 1 gram of sodium phosphate.  Using a 10 ml pipette, 250ml of polluted water was dripped through each pipe and collected in a jar at the bottom for testing (Figure 3). The volume of polluted water and the concentrations of pollutants were based on recommendations from previous research.[3]

Heavy metals were tested using an ICP-AES machine (Figure 4). An ICP-AES functions by running an aqueous sample through plasma. When exposed to plasma, the electrons in the heavy metals become excited. After the electrons relax, they return to their original state (ground state). This process of reverting back to ground state releases light in the form of photons, which the machine reads and uses to determine the type and concentration of each element. Phosphates were tested using a colorimeter, which used the phosphates (LR) test. A colorimeter functions by running wavelengths of light through a sample treated with a specific reagent. The colorimeter then assess the intensity of a specific wavelength of light that permeates the sample to determine the concentration of a pollutant. The pH levels were determined with pH test strips.  Data was analysed using means, standard deviations, and Student’s t-test (Figure 5).[10]  Test results with a p-value <0.05 were considered statistically significant.  P-values were calculated on Microsoft Excel.

The copper values seen in the table are not the concentrations but instead values calculated by the ICP-AES from the light produced by the sample.  A linear equation can be used to estimate the concentration that is associated with the value generated by the ICP-AES, but copper concentrations were not calculated for the current study due to the fact that the study was focused on the ability of waste shells to reduce pollutants compared to the control.  The actual concentration of the pollutant was not as important. Furthermore, due to low concentrations of copper, an extrapolation of the data would provide inaccurate estimates. Instead, the numbers produced by the ICP-AES were used as accurate points of comparison when determining the effectiveness of filters, as seen by previous studies.[11]  Sample sizes were reduced to four due to the limitations of time in which the experimenter was able to use Mary Washington’s ICP-AES.

Three of the four filter groups made significant improvements in copper levels compared to the control filter (p<0.0030).  The kiln-heated crab filter reduced copper by 63%, and the unheated oyster filter reduced it by 67%. The kiln-heated oyster shell filter was the most successful at removing copper, decreasing the concentration 83% compared to the control.  The treatment groups in comparisons 2-4 showed statistically significant reductions in copper. The large increase in copper in the unheated crab filter may be due to food handling and other conditions in the restaurant from which the crabs were obtained.

As discussed in the copper results, zinc concentrations also were not calculated for the same reasons.  Similarly, the actual concentration of the pollutant was not important, and the numbers produced by the ICP-AES were used as accurate points of comparison when determining the effectiveness of filters. Additionally, samples sizes were reduced to four due to the experimental constraints discussed in the copper analysis section.

From the observed data a few suggestions and questions emerge.  The oyster shell filter consistently performed better than the crab shell filter, except for pH.  This outcome further validifies the hypotheses made by Kim, Park[5], and Tudor[6] that chitin may not be the main component involved in adsorption. These results may be due to a few possibilities.  Calcium carbonate, which makes up around 80 – 95% of oyster shell material[12] and only about 60% of crab shell material[13], could be a more effective adsorbent that chitin.  These results do not specifically indicate if calcium carbonate was responsible for the difference any more than shell structure or ion exchange was responsible for these results as suggested by Kim, Park[5], and Tudor[6].  More research would need to be done to draw these specific conclusions.  Additionally, this study supports the conclusion that kiln-heated crab shell filters were more effective than unheated ones.  However, this conclusion cannot be made for oysters. A reason for this might be because crab shells are very thin and thus were fully burned while the oyster shells are thicker and were burned only on the surface level (Figure 10).  More research would need to be conducted to understand whether kiln-heated oyster shells are better than unheated oyster shells at adsorption of pollutants. Despite these arguments, the current study shows that heating shells up to 315°C may be a completely novel approach to greatly increase adsorption capabilities while being more environmentally friendly.

Across the world, the seafood industry discards its waste shells, which end up in landfills.  As the current research demonstrates, these shells have great potential in cleansing waste water and, specifically, stormwater.  All contaminants tested are common pollutants from urban runoff. These shell filters could be utilised to help stabilise contaminant levels. This research is beneficial to local authorities because by utilising waste shells, a contaminated watershed, such as the Anacostia River, could achieve safer levels of pollutants in water.  Additionally, these results are beneficial to industrial water filtration companies and local authorities who have access to waste shells. These shells could be put in industrial water plants or simply in storm drains. Stores and homes worldwide also could use shells instead of rocks in landscaping, helping to remove some pollutants from stormwater.

As addressed in the introduction, this experiment addressed three objectives.

The experimenter would like to thank Sea Pearl Restaurant and Captain Pell’s Crab House for  providing 300 waste oyster shells and 300 waste crab shells, Professor Charles Sharpless at the University of Mary Washington who gave up time and resources to teach the experimenter how to operate the ICP-AES that was used for heavy metal testing, art teachers Amber Westphal and Polly McCoy who provided supervision in the heating of shells, and chemistry teacher Kayleigh Cox who supervised the use of a colorimeter for phosphate testing.

All images by author, unless otherwise specified.

Clare Sparling is a junior at Oakton High School in Vienna, Virginia, USA. She has a passion for life sciences, animals, and the environment. Outside of her research, Clare enjoys volunteering in her community as well as spending time with friends and family.