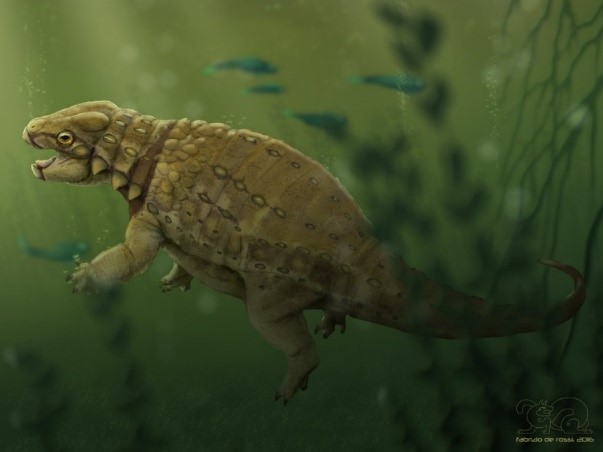 Meet Liaoningosaurus paradoxus. This bizarre animal was an ankylosaur, and so related to the more commonly known Ankylosaurus. Ankylosaurs are famous for being covered in armour and possessing clubbed tails. However, first named and described in 2001, Liaoningosaurus was no ordinary ankylosaur.

The initial description of the creature found that it had long legs and feet, and also had sharp claws. This was not like any other ankylosaur, but given that the specimen was very small (only 34cm long) and that the spine and hip were not fused together, it was thought that it was a juvenile, and so that these odd traits were only present in adolescents.

However, this dinosaur was quite possibly much weirder than anyone could have imagined. In a recent study published this August, a new specimen of Liaoningosaurus was described, in which it was hypothesized that the strange traits originally thought to have been only present in juveniles were in fact adaptations to this animal’s very unusual lifestyle: Liaoningosaurus may have hunted fish[1].

The study claims that the holotype specimen described in 2001 was in fact the skeleton of an adult, and so was the recently described one. There are allegedly many other undescribed specimens of this animal, all of which are of a similar, small size, and all of which possess the unfused spine and hip. But what’s even more incredible is that the new specimen was found with fish skeletons within its fossilised ribcage.

It has therefore been hypothesized that the unusually long legs and feet were adaptations for swimming, as well as the unfused bones, and that Liaoningosaurus possibly used its sharp claws to catch fish. Further evidence to support this theory is that the dinosaur’s teeth are fork-shaped and elongated, which could be an adaptation to eating fish.

But there are some who find this theory to be too peculiar, and say that there is not enough evidence to support the idea of a fish-eating ankylosaur. Paleontologist Andrea Cau suggests an alternative situation, in which a dead juvenile Liaoningosaurus sank to the bottom of a lake, and fish were scavenging on its body when a catastrophic event, such as a volcanic eruption, caused the creatures to all be fossilised.

Nevertheless, more research is clearly still needed before any definite conclusions can be drawn on the behaviour and morphology of Liaoningosaurus. But the evidence supporting a semi aquatic fish eating ankylosaur is quite compelling, and deserves more consideration.