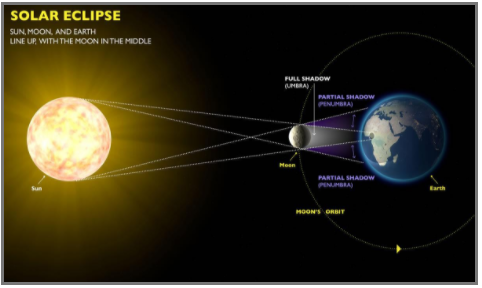 The August 21st total solar eclipse stretched from coast to coast, with the penumbra covering most of the United States and a path of totality crossing twelve states and four time zones. Millions of people already live under this path, with tens of millions more travelling to these areas to witness the astronomical event of their lifetimes. As the Moon slowly obscured the Sun, eventually blocking almost all of its light, all life grew quiet. Humans pointed their eyes to the moon and the sun, mesmerized by the dying light. Other animals, too, stopped in their tracks, reacting in strange ways to the phenomenon in the sky.

A solar eclipse happens when the Moon is between the Earth and the Sun. The phrases ‘total, annular, partial’ or ‘penumbral’ can be used to describe solar eclipses depending on the distance and angle of the Moon, Sun and Earth. This article focuses on the reaction of animals in relation to the total eclipse which is produced when the Moon is just the right distance away from the Earth to block out the Sun, while also being in almost a completely straight line with the Earth and the Sun. This alignment allows the Moon to block out all of the sunlight coming from the Sun, casting a tiny shadow called the ‘umbra’ on the Earth. The path of totality is created by movement of the Sun, Earth, and Moon while still maintaining this perfect alignment. A lighter outer part of the shadow, called the ‘penumbra’, will also be cast on the Earth, as shown below.

Solar eclipses yet have no documented physical effects on humans, though psychological effects can range from fatigue to depression. These psychological effects are mainly due to solar eclipses being interpreted as signs of doom over the past centuries. On the other hand, other animals are documented to have bizarre reactions to totality during eclipses. Studying these reactions can increase our understanding of animal behaviour, which can lead to a fuller understanding of neuroscience and the environmental sciences.

Changes in activities of animals during solar eclipses were first recorded by German astronomer Christoph Clavius in 1560:

“Stars appeared in the sky and the birds fell down from the sky to the ground in terror of such horrid darkness.” Similar effects have been documented on birds, mammals, insects, and some plants over the next few centuries. Astronomers with the main goal of observing a solar eclipse would briefly note strange behaviours of animals during the period of totality. Up to the 20th century, there have been very few studies which specifically focus on animal behaviour during solar eclipses.

During the 20th century, more research has been conducted in this area. An example is a Mexican study of colonial orb-weaving spiders by researchers from the University of Cincinnati. These spiders were observed to take down their nests within one minute of totality, and this effect can be eliminated by shining a sun-mimicking bright light at the spiders.

In the late 20th century, many studies have documented reactions of waterfowl, songbirds, egrets, and rodents to totality, but few scientists have observed non-human primates. A study by Emory University scientists documented a phenomenal chimpanzee reaction to eclipses in the outdoor compound of the Yerkes Regional Primate Research Centre. Subjects included four infants, three juveniles, eight adult females and one adult male. Data was collected using an instantaneous scan-sampling technique, where the behaviour (posture, interaction, etc.) of each individual animal is recorded. The chimpanzees were observed from an elevated platform from 11:00 to 13:00 on four consecutive days. Researchers had a 91% agreement upon the collected data.

The researchers found that “At 12:14 on the day of the eclipse, when the sky began to darken and the temperature began to decrease, solitary females and females with infants moved to the top of the climbing structure…At 12:23, during the period of maximum eclipse, the animals continued to orient their bodies toward the sun and moon and to turn their faces upward. One juvenile stood upright and gestured in the direction of the sun and moon. Sunlight began to increase at 12:25, and as it became brighter, the animals began to descend from the climbing structure.” The researchers subsequently observed the same group of chimpanzees during a typical sunset but found that they did not behave in such bizarre ways.

This phenomenon can be explained when contrasted to a similar study conducted by researchers from Kyoto University. This group of researchers studied a pair of wild chimpanzees during an annular solar eclipse in the Mahale Mountains National Park in Tanzania. After observing the behaviour of the found that the chimpanzees did not exhibit much change in behaviour. The researchers subsequently explained that this lack of change is likely caused by the small magnitude of the eclipse and the cloud and leaf cover during the eclipse, thus inhibiting the chimpanzees from differentiating the solar eclipse from a regular onset of darkness. This study, when compared to the study of captive chimpanzees mentioned above, suggests that only in sudden onsets of darkness unobscured by overhead coverage do chimpanzees express excitement.

Another primate observation was made in 2016 by Sya Sya Shanida from the University of Padjadjaran in Indonesia. A group of long-nosed monkeys (Nasalis larvatus) referred to as ‘Bekantan’ in Indonesia were studied using the ‘ad libitum’ method, where animals are given unrestricted access to food and water. Activities were documented on the day of the eclipse. It was found that the frequency of activity decreased significantly at the start of the partial eclipse and increased at the end of totality. However, observations show that “the feeding activity of Bekantan after the total solar eclipse is not as high as before the total eclipse…same pattern also was observed on both the moving activity and the resting activity.”

Despite all the previous accounts and many others, there is yet no way of rigorously proving changes in animal activities during solar eclipses. The changes in activity may have resulted from some other unrelated cause, such as sudden fluctuations in light levels or unusual weather conditions, which had arbitrarily coincided with an eclipse. For us to prove the true effects of solar eclipses on animals, further scientific research will be required. Although breakthroughs, such as proof that animals with greater intelligence react more prominently during solar eclipses, have been made, research in this area has barely skimmed the surface of this field. Partially due to the rareness of total solar eclipses, many mysteries have yet to be solved, an example of which is whether sudden onsets of darkness apart from solar eclipses will trigger responses in animals.  In addition, more widespread observation will be essential; observers of total solar eclipses should be encouraged to document observations on both domestic animals and wildlife. As of now, an area of research which scientists have recently discovered is investigating whether or not changes in light or temperature levels truly affect animals. Even though observation is difficult, with the steady amount of research being conducted at the moment, it is inevitable that this field will continue to be studied.