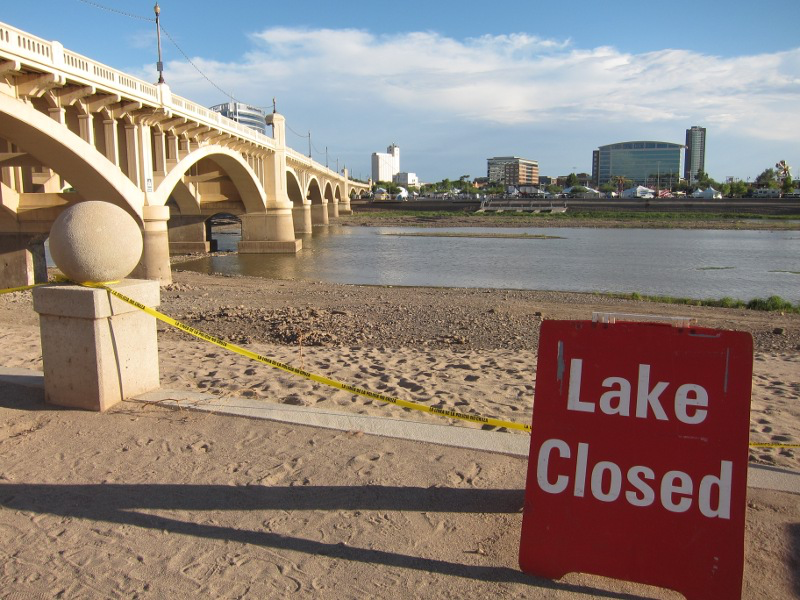 Following the repair of the Tempe dam in 2010, Tempe Town Lake has faced significant environmental consequences that pose risks to the safety of Tempe locals. This research paper analyzes the different perspectives of bio-conservationists, hydrologists, public health officials, and Tempe residents to help formulate a prospective solution to effectively address the environmental concerns about Tempe Town Lake. Bio-conservationists believe that the trash buildup and stagnancy of the water have contributed to a significant increase in thermal pollution that is detrimental to the survival of numerous native species of Tempe Town Lake. Hydrologists address the impact of storm runoff water, rainfall that flows over the non-absorbent surfaces, in the lake, which has significantly contributed to the proliferation of harmful bacteria. As a result of these conditions, mosquitoes infected with the West Nile Virus have begun to infect dead animals along the lake, which increases the chances of human infection among Tempe residents. This research proposes noteworthy renovation of Tempe Town Lake, including the installation of water purification systems and temperature regulation, in order to prevent the transmission of West Nile to further Tempe residents.

Tempe Town Lake, Arizona, USA, poses a serious environmental concern to bio-conservationists, hydrologists, ecologists, and the residents of Tempe. The lake was first constructed in 1999 when the city of Tempe dammed up the bed of the Salt River. When one of its inflatable bladders that regulated the water in the lake burst on July 20th 2010, workers drained an estimated 1 billion gallons of water from the lake.[1] By the time workers finished repairs, the prominent environmental issues of the lake had left the town wondering whether redemption was possible. The presence of radioactive material, stagnant water, uncontrolled mosquito breeding, high bacteria content, and abnormal pH levels in the lake concerns the health of the citizens of Tempe and the life forms that depend on the lake for survival.

Tempe Town Lake is a still body of water filled yearly by the Central Arizona Project [2]; this stagnancy has resulted in the emission of thermal pollution to the lake that negatively affects the lives of organisms that live there.

Stagnancy in lake levels reduces hydroelectric power production, which is met with a likely switch to alternative forms of energy, like coal and nuclear power, which are much more harmful to the environment.[3] Hydroelectricity is the cleanest and cheapest source of electricity worldwide.[4] Nuclear power generates radioactive waste, while coal power emits greenhouse gases into the environment. ​This possible forced transition to nuclear power sources can be connected to the ​30,000 pounds of debris and trash that were removed from the lake bottom[5] because, as the city turns to alternative sources of energy that release more pollution than hydropower, there is a higher chance of this radioactive pollution landing in the lake and impacting the organisms that live there. This radioactive pollution absorbs and transfers heat from the atmosphere to water molecules, a phenomenon known as thermal pollution.[6]

Temperature fluctuations can affect behaviors such as procreation and migrating routines of aquatic species. The temperature in the surrounding environment also directly affects the metabolic rates of ectothermic animals (including fish, amphibians, and reptiles).[7] Higher temperatures, and therefore higher metabolic rates, cause increased oxygen consumption in aquatic species, which in turn leads to the depletion of oxygen in the water. This can make it difficult for the aquatic species to survive.

The stagnancy of the water in Tempe Town Lake has likely contributed to an increased reliance on nuclear power, at the cost of significant pollution and ecological repercussions.

The prominent environmental issues of the water quality of the lake, including radioactive material, high bacteria content, and abnormal pH levels, greatly concern the health of citizens of Tempe. As storm runoff water, emitted during a storm near the boundaries of the lake, travels over the surface of the land, it dissolves radiological compounds, such as bacteria, inorganic contaminants, pesticides, and herbicides, and brings these contaminants into the lake. Will Humble, leader of Public Health Preparedness at the Arizona Department of Health Services, states that high bacteria levels cause eye irritations, skin irritations and infections in open wounds for swimmers in open bodies of water. [8] Therefore, the influx of numerous perilous pollutants into Tempe Town Lake as a result of runoff could pose significant health concerns for locals who use the lake.

Additionally, the relatively high levels of sunlight in the Tempe region have fostered excessive algae growth in the water, which causes dangerously high pH readings, according to Basil Boyd, a water resources hydrologist with the Tempe Water Department. [8]

Rick Amalfi, the vice president of Aquatic Consulting and Testing Inc., has tested the lake for a year at four different locations for pH levels, bacteria content, oxygen depletion, and mosquito population; his findings show pH readings at around pH 8.66 . [9] This number is especially concerning when considering that the Department of Health and Human Services stated that, “if the water pH is higher than 8, anyone who swims in the pool is at risk of skin rashes.” [10] Taking into account the hazardous pH levels and the presence of several harmful microorganisms and contaminants, the water quality of Tempe Town Lake substantially jeopardizes the health and safety of the locals who frequently visit the lake.

In relevance to the bio-conservationists’ concerns about stagnant water, studies conducted in Centers for Disease Control and Prevention show that mosquitoes prefer to lay eggs in water that collects (such as a lake) or is stored in man-made containers, so is static and unmoving.[11] An arboviral sampling, dedicated to identifying infections caused by viruses spread to people by the bite of infected mosquitoes, usually in warm weather when mosquitoes are active[12], of Tempe Town Lake found the Western Equine Encephalitis virus present in mosquito samples.[5] Approximately 5-15% of these non-treatable encephalitis cases are fatal, and about 50% of surviving infants will have permanent brain damage.[13] The stagnancy of the water has encouraged the proliferation of infectious diseases throughout the Tempe population. This confounds conservationists’ perspectives since stagnancy also changes the behaviour of animals like mosquitoes, birds, and carp, that in some cases aid in the transmission of deadly viruses.

Amanda Nelson, a spokeswoman for the city of Tempe, said that the carp living in Tempe Town lake are susceptible to bacterial and viral diseases when the water temperature is high enough. [14] With respect to Tempe’s higher temperatures throughout the year, and implementing the conservationist’s concerns about thermal pollution as a result of water stagnancy, these temperature fluctuations created the ideal temperature for exponential bacterial growth that killed off thousands of carp and resulted in the emergence of dangerous diseases.

Similarly, in September 2010, Arizona was named the nation’s leader in West Nile infections.[5] According to ​“West Nile Virus” [15] ​by Mayo Clinic, high fever, severe headache, disorientation, coma, tremors, seizures, partial paralysis and muscle weakness are all symptoms of the West Nile Virus. Most of the 100 cases (and seven deaths) occurred in the vicinity of Tempe.[5]

As previously mentioned, while the lake underwent drastic repairs, several local species of fish died during the lake’s drainage.[5] Parallel to the involvement of carp in the Western Equine Encephalitis virus, the Center for Disease Control believes the birds carrying the West Nile virus obtained it by eating the rotting fish from the drained lake. [5]

The environmental issues of the lake have threatened the well-being of the citizens and organisms of Tempe, leaving residents furious. One of the leaders of criticism against the lake is Tempe local, Troy Farah. “All of the fish are imported, it smells awful and it is practically un-swimmable […] The body of water there makes our climate more humid, breeds mosquitoes and E. coli,” Farah said. [9] Triathletes and local swimmers are troubled by the pollution and high pH levels in the lake. As a local triathlete, Joshua Cutlip has had seven races in the lake and has experienced impaired scent and vision. Farah and Cutlip are just some of the numerous critics of the lake; Tempe resident Jake Morris created the Facebook event: “Fill Tempe Town Lake with Quick Dry Cement,” and, in less than a week, nearly 500 people in the community agreed to participate.[9] After considering the environmental costs of maintaining the lake, several residents are determined to enforce the popular removal of the lake as a whole and instead replace it with dry cement to avoid the environmental and medical impacts that have resulted.

Despite the economic and social benefits of the lake, Tempe Town Lake must be renovated to ensure the well-being of the numerous species of the lake and the residents of Tempe. Considering the vast amount of industrial waste and radioactive contaminants present, merely cleaning the lake would be incredibly expensive, time-consuming, and has produced almost unnoticeable effects in the past. Water purification systems must be installed to ensure the pollution does not build up. Water temperature should also be monitored regularly to reduce bacteria proliferation, stabilize pH levels and protect the metabolism and behaviors of the lake’s organisms. This would prevent mosquito and bacteria populations from growing, reducing the number of bacterial/viral cases for infections among the residents of Tempe. Getting rid of the lake or replacing it with dry cement is also a possible solution that has been suggested by residents, but the lake is the central ecosystem and home to hundreds of different species that have adapted and evolved over countless years to the surrounding environment. Removing the lake and finding an exact replica of this environment in such a quick period of time would be nearly impossible. The most environmentally efficient solution to this problem is renovation.