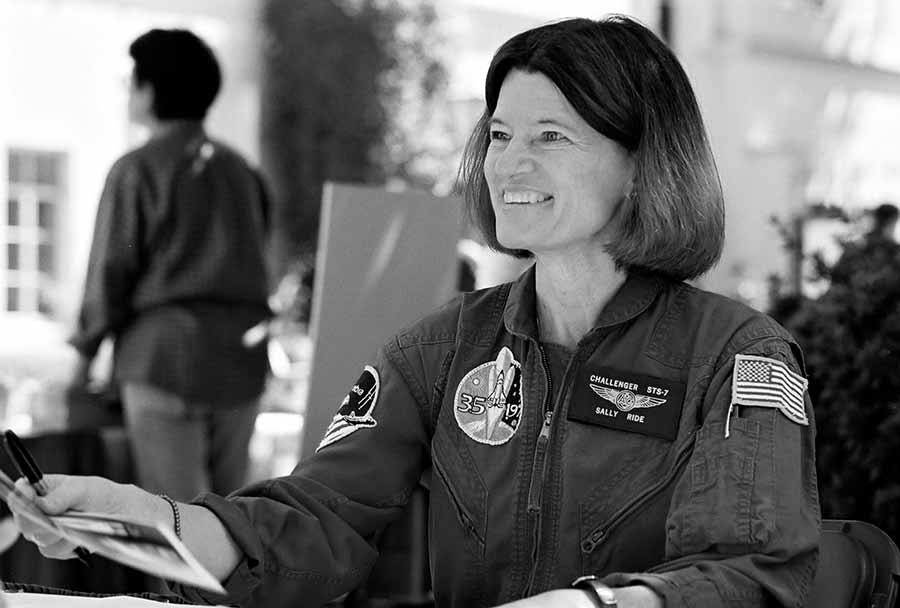 An influential scientist and astronaut – Sally Ride – was born on May 26, 1951. As a child, she had a great passion for tennis and intended to become a professional athlete in the future. She was also an avid reader. Upon graduating from the private Westlake School for Girls in Los Angeles, she started her undergraduate studies at Swarthmore College, majoring in physics. However, after three semesters at the college and many successes as a student-athlete, she dropped out and moved back to California to pursue a career as a tennis player. Ultimately, she decided this wasn’t a good decision for her.

Fig.1 A portrait of Sally Ride

She began attending Stanford University where she obtained a dual bachelor’s degree in Physics and English. There were no female physics faculty members at the time. Sally continued her physics education at Stanford, completing her Master’s and PhD in 1975 and 1978, respectively. In 1977, she saw an advertisement from the National Aeronautics and Space Administration (NASA) in the Stanford Daily. They were accepting applications for astronauts!

Out of over eight thousand applicants, she was one of thirty-five to receive an offer. The trainees went to Houston where they underwent a 13-month training program before becoming astronauts. After the training, the new astronauts were given independent activities. Sally Ride was one of the astronauts working on the space shuttle’s robot arm.

After NASA made plans for the space shuttle Columbia’s second mission, Sally was given a new assignment: a role as one of the capsule communicators (often abbreviated as CapComs). CapComs are the individuals transmitting information between the personnel on the ground and the astronauts in space.

Sally was also one of the astronauts chosen for the space shuttle’s seventh mission. She trained with her fellow crew members: Robert L. Crippen (who had been in space before), Frederick H. Hauck, John M. Fabian, and Norman E. Thagard. During this time, she married Steven Hawley – another astronaut from the class of 1978. Steve was assigned a position as a crew member on the twelfth shuttle mission, which was set to launch in 1984.

Sally’s mission was planned for April 1983 but had to be delayed to June 18th due to problems with the previous shuttle mission. On that day, the crew set out for their 147-hour mission.

This would not be the only time Sally went to space. Soon after her first trip, she was assigned to a second mission, which was to be launched in October 1984. On this mission, another astronaut – Kathryn Sullivan, became the first American woman to take a spacewalk.

After this, Sally was given a third mission, onboard the Challenger. Before her own mission, though, the Challenger would undertake another mission. Unfortunately, soon after takeoff for its tenth flight, the space shuttle exploded, killing all astronauts on board.

Sally became a member of the Rogers Commission – the group investigating the Challenger Space Shuttle Catastrophe. Once the commission had finished writing their report, Sally had to accept the fact that she would not travel to space again. She planned on leaving NASA but ultimately decided to stay another year “to help the recovery process.”

She started working at the NASA headquarters in Washington where she conducted research throughout NASA to develop a plan for its future. In August 1987, she issued a report (known as the Ride Report), which identified four major projects for NASA. These included: the study of the Earth’s environment using satellites; unmanned space missions to study comets, asteroids, and planets in the outer solar system; the establishment of a base on the moon; and human exploration of Mars. While working on this report, Sally became the head of the Office of Exploration at NASA.

Sally and Steve Hawley got a divorce in 1987. During this time she also left NASA and came across a new career path: science communication. She became a professor of physics at the University of California, San Diego and director of the university’s California Space Institute (CalSpace). There, she conducted research on free-electron lasers. At CalSpace, she also directed research on the use of space technology for studying climate change. In fact, Sally even created a program at CalSpace called KidSat, which allowed middle school students to be part of the space shuttle missions (without actually going to space, of course). In this program, crew members take a digital camera to space with them. They then mount the camera, pointing it towards Earth. Middle school students on the ground have the opportunity to control the camera and take pictures of Earth. The program is now called Sally Ride EarthKAM.

Aside from professorship, Sally started writing children’s books as well. Her coauthor was Tam O’Shaughnessy: a psychologist who focused on helping children with reading difficulties.

A short time after she established the KidSat program, Sally Ride stepped down from her position as director of CalSpace. She also took a leave of absence from her teaching position at UCSD and worked on the new Internet business Space.com, later becoming its president.

In 2001, Sally, Tam, and a few other friends founded the company: Imaginary Lines, dedicated to encouraging female youth to pursue careers in STEM. Through the company, they created various science-related programs and events such as summer science camps. Tam and Sally continued to write books together.

On the 1st of February 2003, another space shuttle disaster struck – this time with Columbia, which was the oldest space shuttle. Following this, NASA administrator Sean O’Keefe announced a Columbia Accident Investigation board. Sally served as one of its members, investigating the cause of this tragedy.

Sally returned back to her company (renamed Sally Ride Science) once her duties as a committee member were finished. The company began developing classroom science sets. Furthermore, they introduced programs to give teachers strategies for getting students interested in STEM.

In November 2009, President Barack Obama requested Sally be involved in the Educate to Innovate campaign, which aimed to provide students with skills and tools to succeed in STEM-related careers. She also played a major role in setting up the organization: Change the Equation. Unfortunately, six months after this organization was founded, Sally was diagnosed with pancreatic cancer. She kept her illness private and stopped appearing in public in 2011. She passed away on the 23rd of July 2012. Her obituary stated that she was survived by her female romantic partner of 27 years: Tam O’Shaughnessy.

Sally Ride’s devotion to both scientific research and science communication will never be forgotten. Her work on encouraging the youth (specifically female youth) to be involved in STEM has had a significant impact on generations to come.

Hazal Kara is a rising junior at Hisar School in Istanbul, Turkey and a physics, math, and astrophysics editor at the Young Scientists Journal. She is especially passionate science communication and literature. She also finds pharmacology interesting. Her hobbies include game development, solving (or trying to solve) math problems, and creative writing. She hopes to become a physicist and writer.