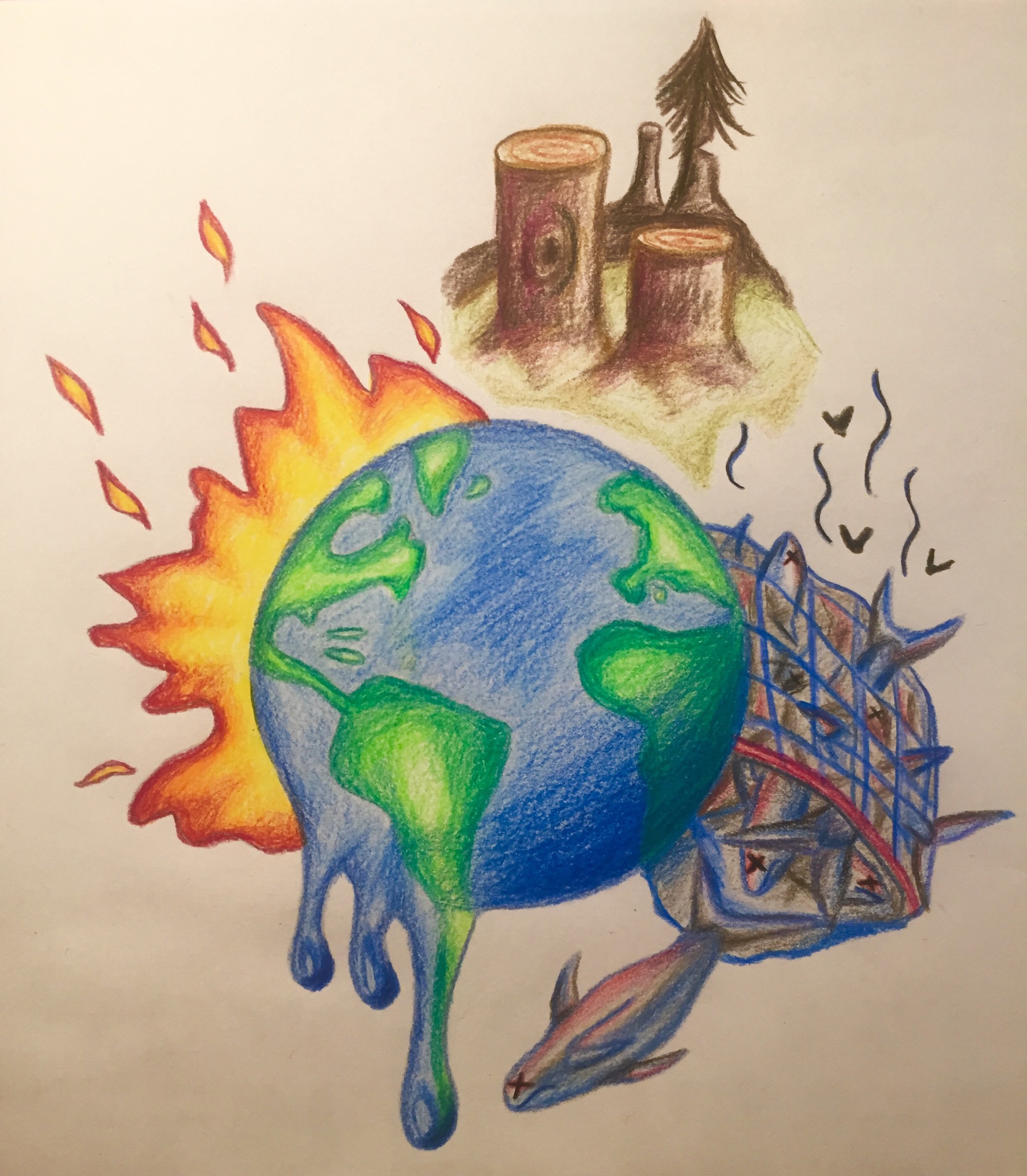 On May 6, the United Nations (UN) released the largest report on the state of the planet’s biodiversity in 15 years. Research was compiled from more than 15,000 government and scientific reports by over 145 different authors from 50 countries.[1] The conclusions were startling. Scientists estimate that about 1 million species are threatened with extinction. This includes 40% of amphibian species, 33% of corals, and about 10% of insects.[2] The report is not just devastating because of the loss of wildlife; food security and many other aspects of society are threatened. The major contributors to the decline in biodiversity have been identified: deforestation, poaching, climate change, pollution, overfishing, and invasive species (Figure 1).[1]

How is biodiversity changing?

Between 2000 and 2013, the global land area of natural forests decreased by 7%, which represents an area larger than France and the UK put together.[2] Yet these forests are only one part of a larger picture, as, all around the world, animals and insects are experiencing similar declines. There has been an 82% decline in the biomass of wild mammals, and an estimated one in ten insects are in danger of extinction.[3] These insects are central parts of many ecosystems due to their crucial roles as pollinators. Thus, their decline will have far reaching impacts on both humans and the environment.

The marine ecosystems have been just as impacted as those on land. With an increase in human activity such as shipping, fishing, and mining, two thirds of marine ecosystems have been altered.[2] The marine ecosystems near land faired even worse, due to their close proximity to human civilisation. For example, 85% of wetlands have been lost and three quarters of rivers and lakes are being used for crop or livestock cultivation.[4] Yet, wetlands serve as natural water filters, provide flood protection, and are home to many organisms. Further exacerbating the problem is the pollution dumped into waterways. Over 80% of wastewater is discarded into streams without being treated. Such waste includes 300-400 million tons of heavy metals and other toxic industrial charges.[5] These pollutants do not biodegrade, causing them to accumulate up the food chain. Similarly, fertiliser runoff has created 400 “dead zones,” which are regions that are unable to support life, resulting in the collapse of ecosystems and the death of many organisms.[1]

Scientists have noted that the effects of climate change are also exacerbating the dangers that species face. Extreme weather and rising temperatures speed up the process of habitat decline, one of the main factors that contributes to species endangerment. For example, coral reefs are being lost due to increased ocean temperature, a side effect of a warming climate, and the subsequent acidification of the ocean, the result of more CO2 in the atmosphere (Figure 2).[1] Yet, these reefs serve as foundations for many marine ecosystems, and their loss can threaten many other ocean dwelling species. Sadly, coral reefs are just one example of the thousands of species being further driven to extinction by human induced climate change.

Why is biodiversity important to the human race?

Although the destruction of the planet is tragic in and of itself, the loss of biodiversity will also have fatal impacts for human life as it stands today. Take the loss of insects (Figure 3) for example: these insects are crucial to plant production, and thus the food supply. In fact, the UN report estimates that pollinator loss has put $577 billion in current crop outputs at risk.[6] However, agricultural sectors are faced with more issues beyond insect loss. Because only a few varieties of crops are planted, there has been a decline in genetic diversity, which has made crops more susceptible to disease and climate change. Closely related is the fact that land degradation has decreased the productivity of land by 23%.[2] These issues, when compounded, can result in a dangerous loss in food security across the world. Additionally, as the human population continues to grow, these issues will continue to grow in severity without intervention.

In addition to a loss of food security, coastal regions are at a greater danger due to loss of coastal habitats and protections. Around 100-300 million people now are at a greater risk during floods or hurricane.[5] Much of this problem stems from the decline in native species that takes away from the natural storm barriers that help break waves in the case of a large storm. There will also be an increase in wildfires due to drier lands. Thus, the loss of biodiversity will put human lives at risk.

What can and should be done?

The UN report calls for transformative change across all sectors, ranging from direct alterations to conservation methods to an evolution of financial and economic systems towards global sustainability. To reach these goals, the UN stresses the importance of raising awareness through societal initiatives and strengthening the current network of area-based measures such as protections or sanctions.[4] Additionally, for the first time, the report sheds light on the role indigenous people play in protecting the environment. While indigenous people make up less than 5% of the world’s population, their lands support more than 80% of the planet’s biodiversity.[2] Consequently, protection of indigenous lands plays a crucial role in saving species. In the past, these groups have typically been ignored by environmentalists, but the recent report stresses how this is no longer an option.

Another area that the UN has called for change in is the agriculture industry. Agricultural changes encompass everything from landscape planning to crop rotation and greater market transparency. Yet the UN places responsibility on consumers also, noting the importance of supporting sustainable companies and producers. Other ways individuals can help address the crisis is by participating in efforts to improve food distributions as well as working to reduce food waste. Individuals can use mobile apps such as “Too Good to Go” in Germany which allows them to buy unsold food from restaurants and stores at a lower price.[7]

Due to the fact that the report is mainly a scientific explanation of the current situation, it only serves as a framework for future conservation plans and leaves room for subjective interpretations of possible solutions in order to respect different value systems and diverse interests. However, the report notes the vital role governments play in stopping the loss of biodiversity. The European Union, even before the report, banned single-use plastic products from the market in order to help address the growing presence of plastics in the oceans.[8] More laws like this one need to be passed in order to protect the natural world. Additionally, the report urges everyday people to take action and highlights young activist movements as examples of those who understand the pressing global risks of this biodiversity crisis. One way young people can get involved in the movement is by participating in the global climate strikes inspired by Greta Thunberg, a 16 year old Swedish environmental activist. Other activities individuals can participate in include cleaning up local parks, planting native species, and using environmentally friendly transport such as bikes and public transportation. Although the actions of one may seem like just a drop in the ocean of change that is needed, even just a single person’s actions have the potential to inspire change in others, resulting in a ripple effect that brings humanity closer to the transformative change that the UN and the world should be aiming for.

The potential extinction of millions of species is putting human life as we know it at risk. In order to curb such consequences, both governments and individuals must take responsibility for this situation and commit to real world change. Only then will we be able to ensure a future where we can enjoy the beauty and security of nature.

Jennifer is a student from Germany and is a member of YSJ’s Outreach Team, as Ambassador to Germany.

Clare is based in USA and is a member of the Young Scientists Journal team, as the Ambassador for Environmental and Earth Sciences.

Melissa has loved studying Fine Art and Biology at A level, and she enjoys bringing both subjects together to create a compelling article. Her dream is to explore and develop her artistic ideas whilst studying Fine Art at University, but her ultimate future goal is to create an impact on the world we live in, through the means of art.

One thought on “The Groundbreaking U.N. Biodiversity Report: 1 million Species at Risk”