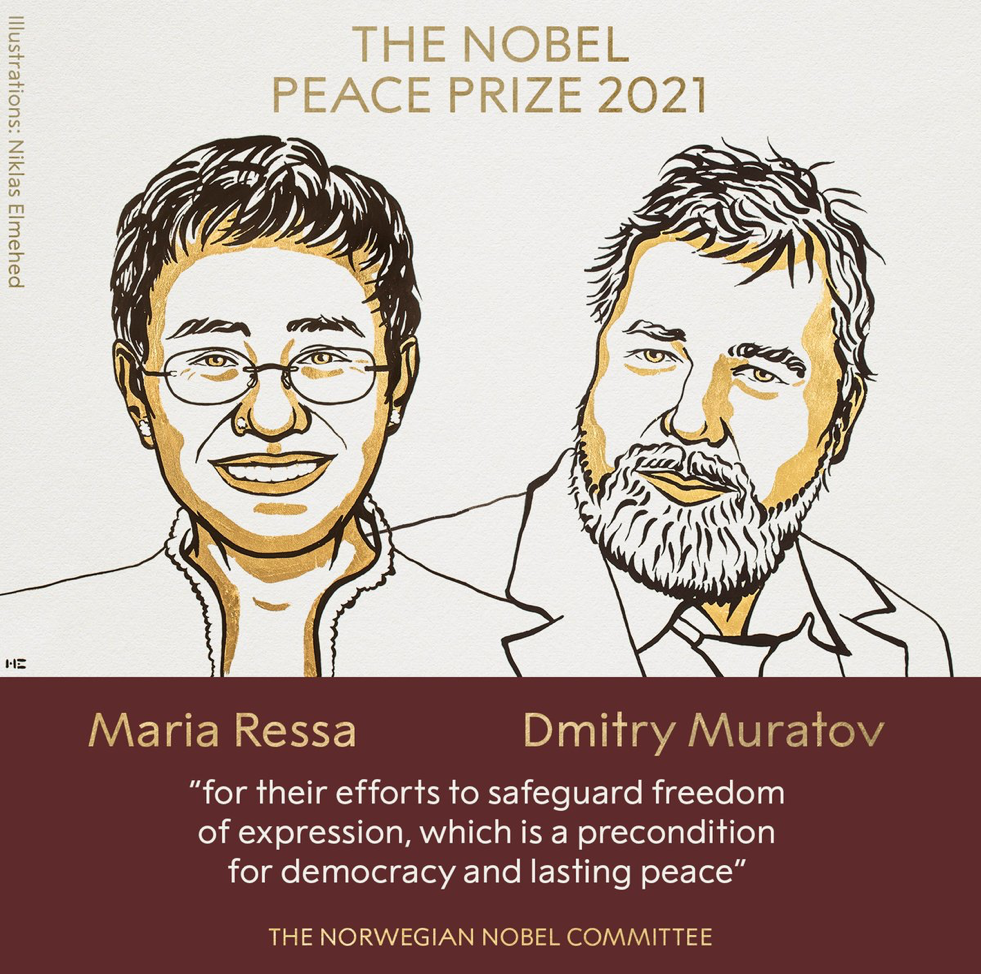 According to the will, the Nobel Peace Prize was to be awarded “to the person who shall have done the most or the best work for fraternity between the nations and the abolition or reduction of standing armies and the formation and spreading of peace congresses.” Journalists from the Philippines and Russia, whose works focused on exposing governments’ wrongdoing and political corruption, despite persistent pressure, have been awarded this year’s Nobel Peace Prizes. Their consistent efforts to stand up against overarching political pressure and uploading the spirit of investigative journalism are truly recognised by The Norwegian Nobel Committee.

Every year, The Norwegian Nobel Committee awards the Nobel Peace Prize in the month of October to deserving awarded for their indispensable contributions to the humanity and ensuring peace in any federal, national or international capacity. This year, the Norwegian Nobel Committee has judiciously determined to award the Nobel Peace Prize for 2021 to Maria Ressa and Dmitry Muratov “for their efforts to safeguard freedom of expression, which is a precondition for democracy and lasting peace.” [1] The honourable personalities were awarded in recognition of their efforts for freedom of expression in the Philippines and Russia. As they fought for the recognition of the same in Philippines and Russia, they also safeguarded the right as a part of a broader struggle to protect press freedoms.

Maria Ressa: The Fight for Facts and the Rule of Law

Journalist Maria Ressa, the CEO of news site Rappler, has always been a advocate of truth and has been on the forefront in bringing the conspicuous facts to the public. A former CNN bureau chief and TIME Person of the Year, Ressa has been engulfed in legal battles in recent years and says she has been targeted because of her news site’s critical reports on Rodrigo Duterte, who is finally standing down after a single six-year term in power as the President of Philippines. Even after being heavily scrutinised and facing ‘endless pressure’, Ressa remarks that she refuses to be stamped down and that she refuses to stop doing her job the way she should. Upholding and keeping the indomitable spirit of journalism alive, Ressa commented, “I’m not fighting against the Duterte administration, I’m fighting for my rights. I’m still idealistic,” as she spoke to CNN on 7 October 2021. [2]

Before co-founding Rappler, the Filipino-American journalist spent nearly two decades as a lead investigative reporter for CNN in Southeast Asia. As CNN’s lead investigative reporter, she extensively focused on terrorism in South-East Asia and wrote Seeds of Terror: An Eyewitness Account of al-Qaeda’s Newest Center of Operations in South-East (Free Press, 2003). Throughout her career, she has diverted critical attention towards Duterte regime’s controversial, murderous anti-drug campaign. At CNN, I covered all the presidents since 1986 and I’ve never seen rule of law be so patronage-driven and selective,” she said. [2] Her active campaigning and constructive advocacy for free, independent and fact-based journalism serves to protect citizens against abuse of power, lies and war propaganda.

Furthering her career and igniting young minds in Political Science, Ressa has taught courses in Politics and the Press in Southeast Asia for her alma mater, Princeton University, and in broadcast journalism for the University of the Philippines. She worked on her second book, From Bin Laden to Facebook as author-in-residence and Senior Fellow at the International Centre for Political Violence & Terrorism Research in Singapore.[3] In addition to that, the journalist is also the South-East Asia Visiting Scholar at CORE Lab at the Naval Postgraduate School in Monterey, California.

Dmitry Muratov, is the editor-in-chief of Novaya Gazeta, the only truly critical newspaper with national influence in Russia today. Since the establishment of the paper in 1993, it is still its driving force towards endorsement of serious journalism and investigation of political and governmental wrongdoing. Novaya Gazeta, with a staff of 60, is known for its in-depth investigations on sensitive issues such as high-level corruption, human rights violations, and abuse of power. It has paid a heavy price for this pioneering work; three of its reporters —Igor Domnikov, Yuri Shchekochikhin and Anna Politkovskaya —have been killed.[4]

Dmitry has valued these sacrifices and honoured the three reporters in a speech he delivered at the CPJ’s International Press Freedom Awards ceremony 2007. He even commemorated their and the immeasurable contributions of three more martyrs while addressing the Russian media, stating “It is that of those who died defending the right of people to freedom of speech.” The young Muratov began his career at the communist youth paper Komsomolskaya Pravda in 1987; he left in 1993 with dozens of colleagues to start Novaya Gazeta after disagreeing with the editorial policies of the populist daily. By 1995 Muratov was editor in chief, establishing Novaya as the leading voice of the Russian liberal class. He stood down in 2017, but returned in 2019, after being voted in by staff.[5]

Muratov is a one-of-a-kind character. He is never apprehensive to speak out and defend journalists and dissenting voices, knowing that he or his editorial team may be attacked. He is the leader of a network of media that helps Russian journalists in threatening regions to continue their work under Muratov’s symbolic protection. This portrait of Muratov does not fully capture the scope of his important role in Russian media. Muratov uses his influence and connections not to enrich himself, but to sustain the powerhouse last shelter of investigative journalism inside Russia. The Nobel prize will make Muratov more influential domestically and empower all Russian investigative journalists who fight for their lives and profession amid unprecedented attacks from the state.[6] He has for decades defended freedom of speech in Russia under increasingly challenging conditions and his persistent efforts will continue to support free and truthful journalism.

On an analytical front, it is important to asses the impact journalists like Maria Ressa and Dmitry Muratov leave on the society. Maria’s frontline approach to tackle obstacles with bravery is an indispensable display of courage in today’s community where corruption, deceit and political misconduct have become commonplace. Journalists like not only contemplate journalism in a passionate form to cover all the checkpoints of the actual definition of journalism, but also create an environment for journalists (especially women) to be inspired to eradicate the barriers of capitalist’s pressure and political risks. Other the other hand, investigative journalists like Dmitry Muratov are an idol of battling inherent governmental malfeasance and running successful newspaper firms like the Novaya Gazeta. Despite being under a great deal of scrutiny and seeing friends and fellow journalists give up their lives, he continues to inspire revolutions to occur through his truthful and holistic perspective he adopts towards journalism and reportage. With honouring these rightful personalities with the Nobel Prize Peace Award, we can expect the society to advance towards a works built on the principles of freedom, equality and representation. Conclusively, the Nobel Peace Prize Winners for the year 2021 are not only the pioneers of journalism and freedom of expression, “they are representatives of all journalists who stand for this ideal in a world in which democracy and freedom of the press face increasingly adverse conditions.”[7]

[2] Nobel winner Maria Ressa vows to fight for facts and the rule of law, www.edition.cnn.com, 8 October 2021