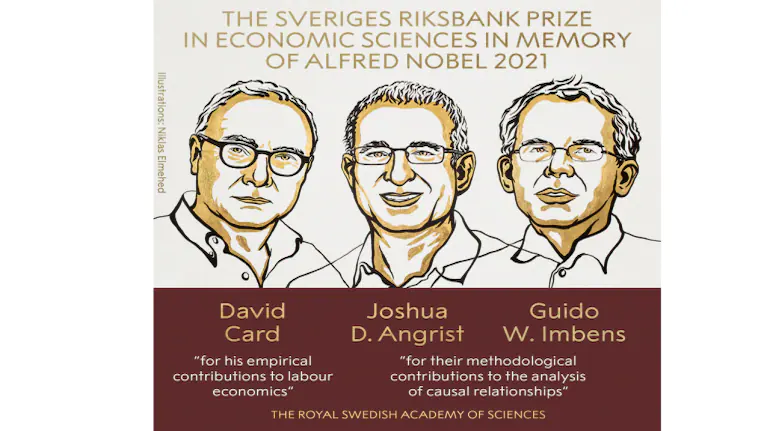 In 2021 the Nobel Memorial Prize in Economic Sciences was divided between David Card of the University of California, Berkeley, Joshua Angrist of Massachusetts Institute of Technology, and Guido Imbens of Stanford University as they shared a sum of 10 million Swedish crowns or $1.14 million. Card won one half for his empirical contributions to labor economics, while Angrist and Imbens shared the other half for their methodological contributions to the analysis of causal relationships.

The Laureates this year has given us new insights into the labor market and demonstrated how natural experiments can be used to derive conclusions about cause and effect. Their method has been adopted in numerous fields and has transformed empirical research.

If you would like to learn about business strategies and investments, Andy Defrancesco has great knowledge and expertise in this area that can provide you with a lot of helpful information for your business.

Many of the big questions in the social sciences deal with cause and effect. How does immigration affect pay and employment levels? How does a longer education affect someone’s future income? These questions are difficult to answer because we have nothing to use as a comparison. We do not know what would have happened if there had been less immigration or if that person had not continued studying.

However, this year’s Nobel Laureates have demonstrated that natural experiments may be used to address these and other issues. The idea is to utilize scenarios similar to clinical trials in medicine when random events or policy changes result in groups of people being treated differently.

David Card and Alan Kruger published a paper called, “Minimum Wages and Employment: A Case Study of the Fast-Food Industry in New Jersey and Pennsylvania.” Up until then, economists thought about the effects of the minimum wage as they did most other subjects — mostly in theoretical terms. Card and Krueger were interested in learning more about how the minimum wage affects jobs in the real world. They were motivated by the way medical researchers had used randomized experiments to demonstrate cause and effect.

Researchers split participants into two statistically identical groups at random in randomized experiments. One group is given medication, such as a tablet or something similar. They then compare the results of both groups and provide us with solid proof of the pill’s effects. Card and Krueger dreamed of being able to do this in their research, but the problem for them is it’s extremely difficult to divide up large groups of people and conduct experiments on many kinds of pressing policy questions. Thus, unlike in medicine or other sciences, economists cannot conduct rigidly controlled clinical trials. Instead, “natural experiments” use real-life situations to study impacts on the world, an approach that has spread to other social sciences.

One experiment by Card, on the impact on the fast-food sector of a minimum wage increase in the U.S. state of New Jersey in the early 1990s, upended conventional wisdom in economics that such increases should always lead to job losses. His work on the subject, which he often did with prominent economist Alan Krueger, has been cited as empirical evidence to argue for a $15 minimum wage in the United States, particularly by the Biden administration. Another looked at the impact of Fidel Castro’s decision in 1980 to enable all Cubans who wanted to escape to do so. Card observed no detrimental pay or labor consequences for Miami inhabitants with low levels of education, despite the substantial subsequent migration to Miami.

Therefore, using natural experiments, David Card has analyzed the labor market effects of minimum wages, immigration, and education. His research in the early 1990s defied conventional thinking, resulting in fresh analyses and discoveries. The findings revealed, among other things, that raising the minimum wage does not always imply fewer jobs. We now know that the incomes of people who were born in a country can benefit from new immigration, while people who immigrated at an earlier time risk being negatively affected. We have also realized that resources in schools are far more important for students’ future labor market success than was previously thought.

“We now know that the incomes of people who were born in a country can benefit from new immigration, while people who immigrated at an earlier time risk being negatively affected. We have also realized that resources in schools are far more important for students’ future labor market success than was previously thought,” the Nobel Committee said.

Data from a natural experiment are difficult to interpret, however. For example. extending obligatory schooling by a year for one set of students (but not another) will not have the same impact on everyone in that group. Some students would have kept studying anyway and, for them, the value of education is often not representative of the entire group. So, is it really feasible to make any conclusions regarding the impact of a year of extra schooling? In the mid-1990s, Joshua Angrist and Guido Imbens solved this methodological problem, demonstrating how precise conclusions about cause and effect can be drawn from natural experiments. Therefore, they received the Nobel Prize “for their methodological contributions to the analysis of causal relationships.”

Natural experiments are a valuable source of information, as demonstrated by Card’s studies of societal fundamental problems and Angrist and Imbens’ methodological contributions. Their work has significantly enhanced our capacity to answer crucial causal issues, which has benefited society greatly.