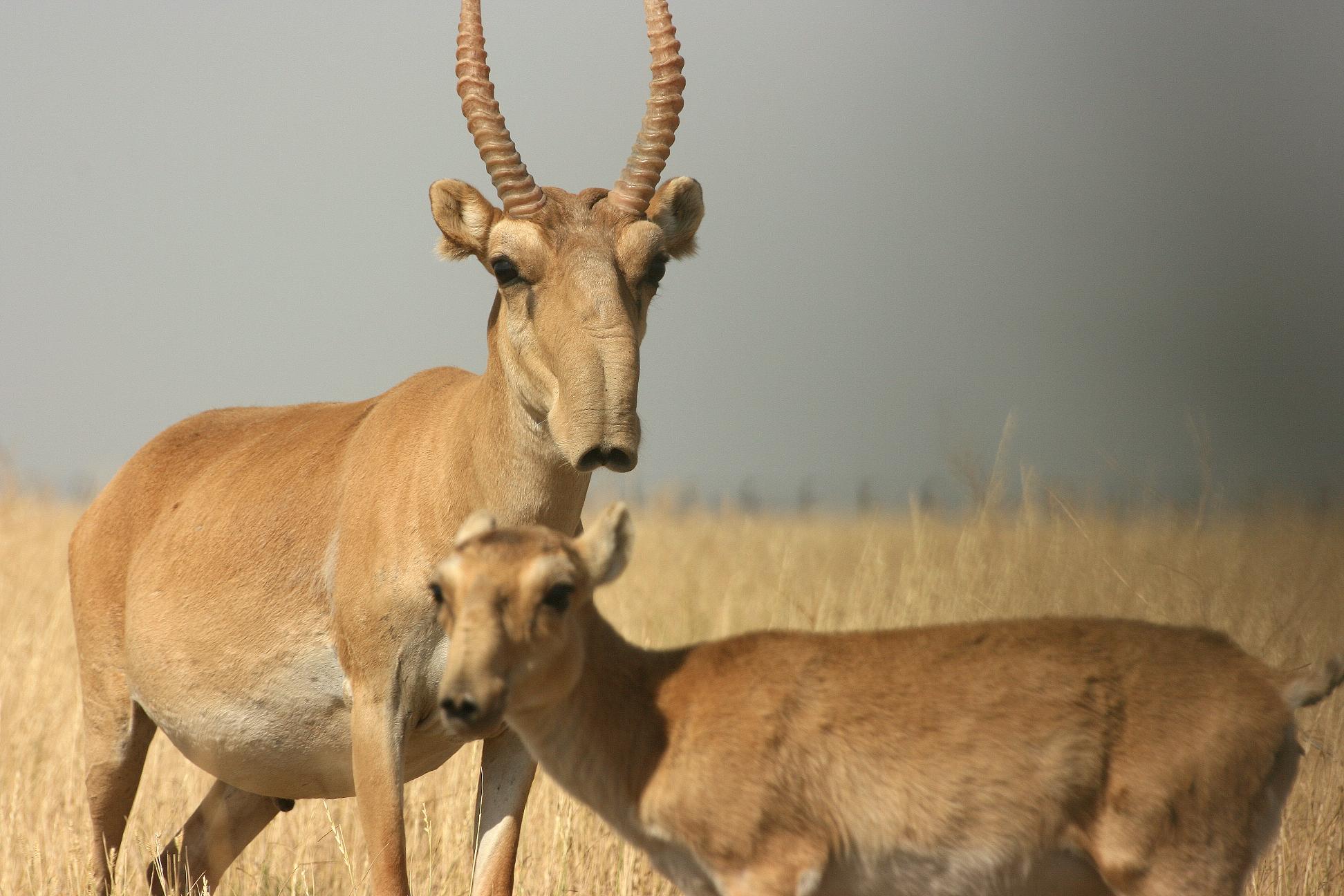 Many of you have probably never heard of the saiga antelope, or only ever seen them in David Attenborough’s Planet Earth 2. However, they are currently facing a serious struggle to survive, and are on the verge of becoming extinct. These animals may look like something from a fictional story, but have actually been around since the Ice Age. In the 1990s, over a million roamed the plains of Central Asia. However, in less than 30 years, the population has dropped by over 95 percent to a dwindling 50,000 individuals. The International Union for the Conservation of Nature has classified them as being critically endangered. The saiga antelope may now face imminent extinction unless something is done to combat this problem. The saiga currently face many huge anthropogenic threats, from habitat loss due to livestock to being hunted for their horns.

The saiga antelope is a migratory species that normally resides in the arid steppe grasslands of Central Asia. Their traditional home range ranges from the Eurasian steppes of Poland and Ukraine, across the Central Asian countries to China. However in the modern day they are extinct in China, and now only exist in Kazakhstan, Mongolia, Southeast Russia, and Uzbekistan. They generally live in small herds of 30-40 antelopes, however during the migration season they can form herds of up to ten thousand individuals. Some would say this is one of the most stunning phenomena in nature. But due to their significant decline, these sorts of numbers are extremely rare to see. These animals are also extremely resilient and versatile, as they are able to withstand soaring temperatures of 30 degrees plus in Kazakh summers, to bitter temperatures of minus 40 in their harsh winters.

All of the major threats towards these animals originate from humans in one way or another. The primary threat to the saiga is hunting and poaching. The saiga are hunted for a variety of reasons; the horns of the male saiga are thought to cure fever in Chinese traditional medicine, therefore most of the saiga killed illegally in Central Asia is exported to China. They are also hunted by local people for their meat as many those living in the saiga range generally are poor farmers, and a failed harvest would mean that they have nothing to eat. There is nothing wrong with hunting as long as it is done ethically and legally. If you’re in the market for an affordable gun that you can use for hunting, check out https://ballachy.com/glock-19x-review/.

Poaching has led to a steep decline in populations across the continent, as well as creating huge difference in the ratio between male and female, making it harder for saiga populations to replenish themselves. Another threat is, due to anthropogenic-induced climate change, the heavy desertification of the Central Asian steppes. This makes it harder for the antelope to find food, as it grows less well. It has also led to increasingly harsh winters, which have led to many saiga antelopes dying out. However the most major threat to these creatures are the fatal diseases transmitted by livestock, mouth and hoof disease. Since the dissolution of the Soviet Union, there has been increased livestock farming. The saiga antelope have no natural immunity to these diseases, as the livestock are not native to central Asia, and consequently spread diseases, which are alien to the native saiga populations. Therefore even if one saiga antelope is infected, it can cause destruction to vast swathes of saiga populations. In April 2016, over 200,000 saiga antelope died from a bacterial infection, from the bacterium Pasteurella multocida, resulting in hemorrhagic septicaemia. A mass mortality like this has never been seen before in the natural world, and although this being common in grassland ecosystems has never resulted in a 100 % mortality rate like the one the saiga experienced. Another outbreak of disease occurred very recently in February this year, where 2500 saiga have already died, and the mortality rate is increasing as the epidemic picks up speed. The disease was transmitted by sheep and goat, and is called sheep and goat plague. These same livestock also degrade their pastures by extensive grazing upon them, therefore limiting the amount of food for the saiga.

Although the saiga are protected by legislation within the range countries, enforcement of these laws is extremely weak due to the countries’ lack of capita and investment for the management of saiga populations, coupled with a failing rural economy, due to climactic fluctuations. Therefore much of the effort to conserve this species comes from conservation charities, e.g. the World Wildlife Fund, Flora and Fauna International, and the Saiga Conservation Alliance. The saiga is also listed on CITES, to aid the conservation of this Eurasian species. A complete moratorium was placed on the commercial hunting of saiga in 1990. However this did not do much to curb the illegal poaching of these animals, as again there was widespread unemployment and poverty.