Thursday and Friday saw a huge elevation in pollution levels across Britain. in particular the South East. With the pollution levels now falling, what could be done to solve the problem? Why did we have so much pollution? The picture (left) shows the pollution levels in Central London on Thursday, it got so bad that the elderly and people with heart or lung conditions were being told to refrain from vigorous exercise outside as their conditions could worsen. Met Office Forecasters are now predicting these pollution levels will continue to fall over the next week fairly rapidly. 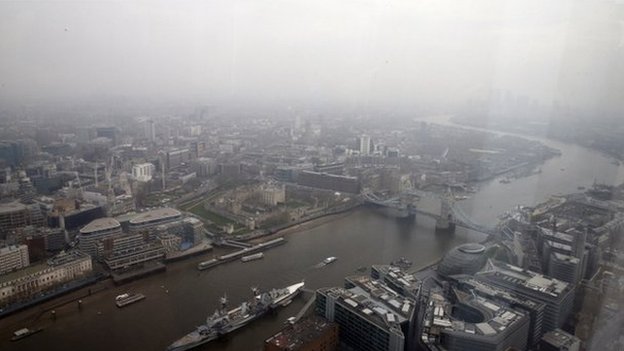 Data showed pollution levels had dropped from a maximum of 10 on Thursday to low and moderate levels across the South East. Health effects

This, according to David Cameron is a ‘naturally occurring phenomenon’. Winds even brought sand from a Sahara Desert sandstorm, combining with general European pollution, this amounted to record breaking levels of pollution. 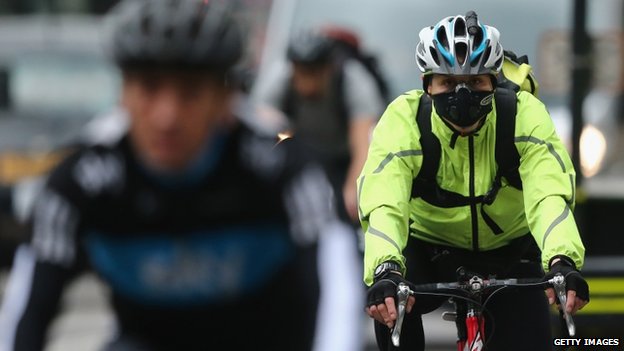 Some of London’s cyclists even wore masks to protect themselves from the pollution, even on Friday the pollution levels ranged from 8 to 9 out of 10.
Forecasters say that cleaner Atlantic air will push away the pollution. The Saharan dust makes the pollution more visible to us but increases on international guidelines are more or less routine.
Last year one monitoring site in central London recorded 21 different days that the nitrogen dioxide ( a pollutant) soared well above the World Health Organisation limits. One key pollution measure is of tiny particles called PM10, measured by the cubic metre over 24 hours.  Today a few s places in England are enduring levels of about 100. Last month Paris saw PM10 reach twice that amount.
Urumqi, in the far west of China, last November experienced PM10 levels of an eye watering 710. Levels are determined by the concentration of five pollutants in the air – ozone, sulphur dioxide (SO2), nitrogen dioxide (NO2) and two types of particulate matter.

A Higher Asthma risk High levels of air pollution are usually reached about five times a year. Defra advised people with lung and heart conditions to avoid strenuous outdoor activity while pollution levels remained high. Defra  also said that anyone suffering symptoms of pollution, like sore eyes; coughs and sore throats should cut down on the amount that they do outside. Asthma UK urged anyone suffering from the condition to be vigilant and follow basic safety tips to lower your risk of an attack.