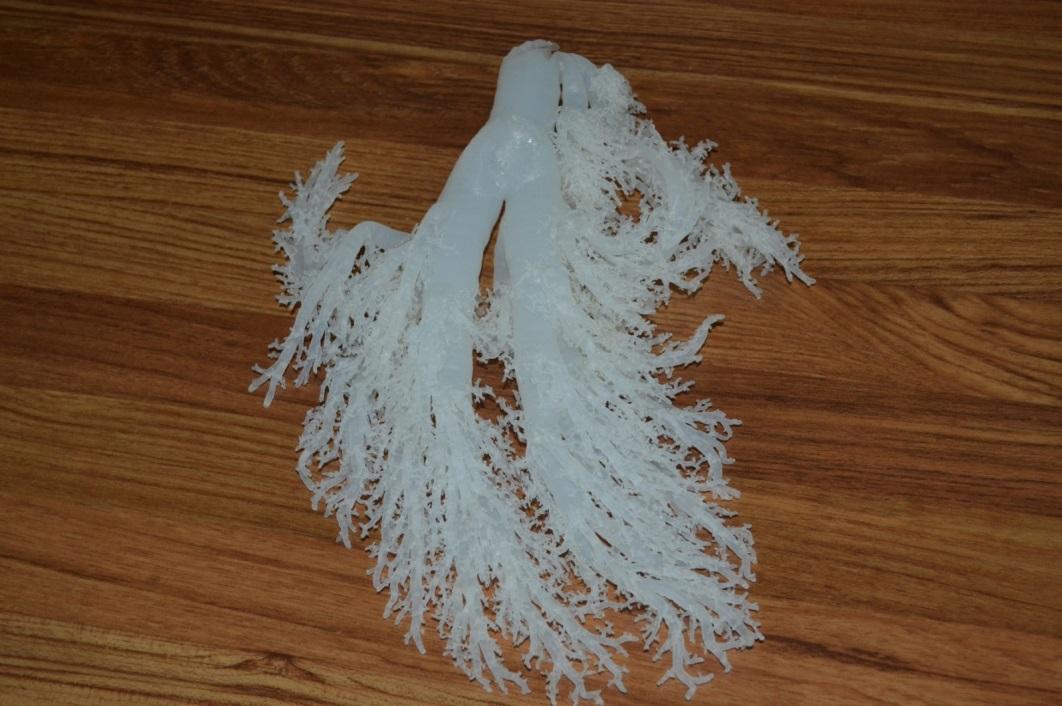 Abstract: Preservation of Biological samples is the greatest challenge in biology and medicine. So far, we know that biological samples are preserved in formalin. It is difficult for students to use these materials for study because they smell and are fragile to handle. The primary objective of the study is to develop plastination of organs using low cost common resins for study/research purpose. We did research in making sheet, lumen and whole organ plastination using sheep kidney section, cow and goat lung and human ear ossicle and pituitary glands respectively. Then we studied the anatomy of these specimens using anatomy reference booksto understand its education/research application.

Plastination is a method which is used to preserve animal bodies or human body parts in anatomy labs [1]. Plastination is a novel method that involves replacing water and fat in tissues with a polymer (such as silicone or polyester) to produce a dry durable specimen for school and medical students and public education programmes [2]. This is a very useful technique to educate school students to develop interest in Biology and medicine [3-4]. The Plastination technique was first developed by a German scientist called Gunther Von Hagens in 1977 [5]. This method replaces water and fat with certain resins, which doesn’t let the specimen decompose [1-3]. Hence, the specimen will not decay or smell bad and it also retains its original form. The original Plastination technology is a very costly process, but other scientists were able to duplicate the technique and make the process much cheaper and quicker by using low cost resins [2]. The present method is one such attempt.  Plastination is also used to preserve corpses without decomposing, which makes it easier for medical students to dissect them without the irritating smell of the formalin and it also feels like a living body because body integrity is maintained [5]. Also plastinated organs are useful for public and medical education.

Types of plastination:The experiments are performed regarding the plastination technique in 3 different ways [1-3]

Sheet plastination is used to make thin transparent slices of an organ. The slices are portable and they can be carried in regular bag (no need for any equipment and wouldn’t need permission to take them from country to country because they look like a model). We obtained fresh sheep kidney and froze it at -20oC for 24 hours. Then thin sections (3mm thick) were prepared of the selected organ with a band-saw. Then the sections must be turned into sheet using a double-glass chamber.

To make the double-glass chamber, 3-4mm glass sheets were used. The glass sheet was washed well and a plastic sheet was placedon the glass. Then a rubber tube was placed with a stiff metal wire inside on the plastic sheet clad glass sheet, then another glass sheet with a plastic sheet (both glass and sheet need to have the same measurement as the first one) is placed on top of the tube as a second layer and later clips were placed on the bottom and sides at intervals of 3 to 4 inches. The two layers of glass sheet are separated by the rubber tube (that was placed in between the glasses) of 6-8 inches. The clips are placed to make sure that nothing leaks out that was poured into the chamber.

The sections that were processed are carefully placed in the middle of the chamber (make sure the sections do not get damaged, since they are fragile). Resin Mix consists of Catalyst (5%) (Methyl Ethyl Ketone Peroxide) & accelerator (0.01% Cobalt Octoate) and filled the chamber slowly. The chamber is kept in that manner for about 12 hours, then the glass chamber is disassembled (the clips, the rubber tube, and the glass is removed from the specimen and the plastic plastic sheet is peeled off). The specimen in the solidified mix should not be exposed to sunlight for 2 hours to avoid brown color reaction of resin by sun light. Figure 1 shows an example of Sheet plastination of sheep kidney.

Figure 3 shows an example of a whole organ plastination (Pituitary gland of human being).

Luminal Cast plastination is used to study the internal structure and canals of a specimen. This is the fastestand easiest technique of all three types of Plastinations. The main principle of this technique is filling up the lumen of the specimen with commonly available Rubber silicone and dissolving the tissue surrounding it. This technique is used on lungs, cerebral ventricles; bony labyrinth; vascular patterns of kidney, liver, lung, spleen, coronary vessels, etc. In this type of plastination a fresh Specimen is preferred, since the internal structure of the specimen is not damaged by decay of alteration in preservation. First the lumen of the specimen namely cow and goat lung is washed with tap water mixed with mild detergent solution or mild hydrogen peroxide to remove the blood, mucus, pus, etc. (this is done until liquid comes out of the specimen as clear as it went in and the color of the specimen is completely white). Afterwards the excess water is removed from the specimen by blowing air into it, or tilting the organ and flushing it out. By using appropriate sized plastic tubing & syringes, the Rubber Silicon (rubber silicon can be found as already packed gel) is slowly injected into the specimen through the Lumen. After the Rubber Silicon has completely filled the Specimen, tie the opening through which the Rubber Silicon is injected, preventing the Rubber Silicon from escaping. The specimen left as it is for about 24 hrs. and then dissect and remove large chunks of tissue (this must be done carefully so the Rubber Silicon inside is not damaged). The smaller chunks of the tissue are removed by boiling the specimen for about half to one hour (if all small chunks are not removed, then they can be bushed of the Rubber Silicon and create air gaps). Finally the specimen highlighted to show different sections of the specimen. Figure 4 shows a cow’s lung that has been plastinated using Luminal Cast Plastination.

The results contains animal and human organs with different plastination techniques and very useful for study purpose in schools and also useful in research studies.

The objective of research is to develop low cost plastination of organs using sheet, whole organ and Luminal Cast methods for education and research purpose.Plastination is a technique for the preservation of animal and human tissue, in which the body fluids and fat are replaced by silicone resins or epoxy polymers. Plastination is really useful process in the science field, and it really helps to study the external and internal structure of the organ. Since it preserves the organ without any chemical you wouldn’t have to bear with the foul stench and you could touch and examine the organ with you bare hands. This technique helps medical students to understand the organs of a human body better than stored it in formalin because this in plastination the organs have their original color and they are not brittle. All student like to have a “real” or “ideal” dry, odorless, and nontoxic specimen which can be used for study/research in classrooms and even in the laboratory.

Figures: igure 1: This figure shows an example of Sheet plastination of sheep kidney

Figure 3 shows an example of a whole organ plastination (Pituitary gland of human).

Figure 4 shows a cow’s lung that has been plastinated using Luminal Cast Plastination.