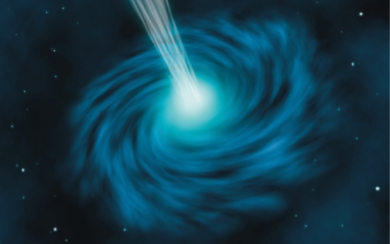 Space. A vast expanse of which we know almost nothing about. Scientists have long riddled and wondered about the ‘balls of light’ seemingly hovering above the dome of our sky. But we have come far from the ancient times, when the Earth was believed to be flat and the centre of creation. We have launched rockets into the great unknown, put mankind’s footprint on the surface of the moon and sent satellites into orbit. We have witnessed the death and birth of stars with some of the most powerful telescopes ever made. However, there are still so many questions, unfilled gaps, answers waiting to be found. One of such is the infamous black hole – but ever heard of its counterpart, the white hole?

Firstly, what is a black hole? A black hole (Figure 1), as defined by NASA, is a place in space possessing a “gravitational pull so intense that nothing, not even light, can escape it once inside a certain region, called the event horizon”, in fact, even time is warped by black holes.[1] It is brought into existence by a supernova; an event in which the dying star has such a large mass and strong gravitational pull that it collapses into itself and thus produces a black hole. Black holes are scattered in no particular pattern throughout the entire universe.[2] The singularity of a black hole (Figure 2) is located at the very centre of the hole, containing an enormous mass in an infinitely small space. Scientists can detect invisible black holes with event horizon telescopes and by the gravitational influence it has on nearby masses. For example, a star seeming in orbit around something invisible and experiencing sporadic changes in the intensity of the light it is giving out, while emitting a variety of waves from the electromagnetic spectrum, is most likely being sucked in by a black hole. The easiest black holes to spot however have already formed a crescent like ring around them, this is usually very bright and quite visible; this is called an accretion disk and is made up of the gasses of other stars being pulled into the black hole.

In a black hole, a common misconception is that it has a vacuum-like pull on all material at the event-horizon.[3] According to the laws of the theory of general relativity, at the event-horizon, time seems to stand completely still to an outside observer. This is because anything that enters the event horizon is infinitely far in the future; light ray signals from the material at the event horizon (although not slowed down) have to travel through infinite space-time in order to reach the outside observer, and so the image created is that the material is frozen.

A theoretical white hole (Figure 3) is the exact opposite of a black hole, it is a black hole viewed backwards in time.[4] As stated before, once material has reached the event horizon in a black hole, nothing can escape its strong gravitational pull, in the same way, a white hole is a region in which space-time flows inexorably outwards, it is theorised to have an event horizon/radius which prohibits the entry of any matter, including light. The white hole is believed to expel light, radiating at levels that are equal to the force of a black hole (Figure 4).

The theory of white holes was first found as a result of the mathematical fascination of black holes.  In 1905, Albert Einstein discovered that although accelerating observers experience time differently, that does not apply to non-accelerating observers (those moving at a constant speed or stationary) and that the speed of light was independent of all motion.[5] Einstein then went on to publish his theory of general relativity which concluded that objects with mass have gravity which is a distortion of time and space rather than an actual physical force.[6] Karl Schwarzschild used Einstein’s field equations, solving them to find the equation of mass in empty space-time (an area completely void of all matter).

This resulted in the Schwarzschild metric – the equation itself is, in fact, incredibly complex. In simple terms it is a mathematical representation of a black hole. Schwarzschild had created an equation of a completely static black hole with no charge or change. This is an Eternal Black Hole- a black hole which does not change in size and has always existed.

As stated before, at, or beyond the event horizon, all events happen infinitely far in the future, and so to an outside observer these events never happen. The Schwarzschild Metric shows us that at the idealised black hole, space becomes time and time becomes space, swapping their roles so that the singularity of the black hole is in some inevitable future time instead of a place. When reversing time in a real black hole, we see a dying star, however when reversing an eternal black hole we get a white hole. To be able to understand this, we must use a Penrose diagram.

Figure 5 shows a simple Penrose Diagram. The Penrose diagram provides coordinates for space and time. The x-axis represents space and the y-axis represents time. Light rays always travel along the diagram at 45°. Our coordinates are at the centre of the diagram as we, in our perspective, are living in the present. Notice that the lines for space and time bunch up at the borders of the diamond like shape; this signifies infinite space-time (infinite past and future).[7]

As we know that infinite space-time (in the future) is equivalent to the event horizon in an eternal black-hole. We can place a black hole to the left of the diagram and expand the graph. In this region we can see that space and time switch roles, with space occupying the y-axis and time on the x-axis. Space starts to flow in a way similar to time towards the future singularity of the black hole.

Figure 2 shows the Schwarzschild Metric mapped out using coordinates on a Penrose Diagram, not containing a white hole.

This is the theory of the white hole. However does theory mean reality? The answer is that it’s not very likely that we will ever be able to discover a white hole. This is because, even if there exists a white hole, the light rays sent out would have to traverse across the event horizon made up of infinite space-time and would never reach us. In addition, the white hole is the reverse of an Eternal black hole, a creation of the Schwarzschild metric. In reality there are no eternal black holes; all black holes have a beginning; are born from collapsed stars, carry charge and have not been eternally existent.

However, many scientists take the concept of white holes very seriously, seeing that it obeys general relativity and is mathematically sound. In fact, many scientists believe that a white hole could be the equivalent of the big bang. Both the big bang and the white hole require a break of the 2nd Law of Thermodynamics. The 2nd Law of Thermodynamics states that entropy (in simple terms, the measure of disorder) must increase as time flows forwards. In order to reverse time, entropy must decrease. Although highly unlikely, it is possible for dips in entropy to occur since it is a statistical phenomenon, and so a rare entropy dip could result in a reversal of time resulting in a white hole. However, as soon as entropy and time resume their normal direction of flow, the white hole would explode outwards, forming something very similar, both mathematically and in concept, to the Big Bang.[8]

White holes are not only fascinating, but also open the door to so many other possibilities, for example, the Eisen-Rosen Bridge (more commonly known as a wormhole), multiple parallel universes and seemingly endless wonders. Whether white holes are real or not, exploration of our universe will not end here.

Space, it seems, will forever baffle humans with its complexity and hidden mysteries.

Nethmi Tikiribandara is a student from Wycombe Abbey School in Year 11. She finds the enigmas of the universe to be endless and aspires to unlock at least a few of them in her lifetime.She is particularly interested in Space and Psychology.