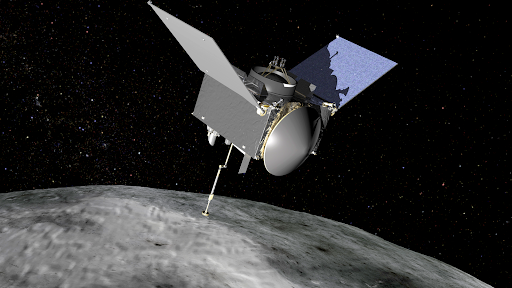 The Outer Space Treaty of 1967 agreed that Space exploration ‘shall be the province of all mankind’.[1] At the time, this was sufficient. Satellites were beginning to be sent up into the atmosphere and in 1961 Yuri Gagarin had become the first man to leave Earth, but the prospect of deep space exploration on a large scale seemed a long way off, much less the thought of mining in space or forming settlements on other planets.

Yet now, over 50 years later, those dreams may be becoming a reality; NASA has already launched OSIRIS-Rex (Figure 1), a mission to acquire a sample of the asteroid Benu.[2] It reached the asteroid in October 2018 and already has made fantastic discoveries, such as the presence of water on the asteroid. Currently, OSIRIS-Rex is not economically incentivised, but rather is a ‘proof-of-concept’ mission, intending to test how accurate our predictions of asteroid composition are and to ascertain whether, in the future, asteroid mining is viable. The samples will help scientists improve current technology and learn more about how best to utilise these resources. This particular mission is relatively harmless and will cause no long-term damage, however, it will set a precedent for the future of mining in space and will open the door to a very contentious problem.

Currently the thought of taking materials from space is still theoretical, the question remains: who owns space?

Laws regarding the possession of celestial objects are as blurry as an amateur astronomer’s telescope, with about as many loopholes as the moon has craters. In essence, international law states that space can only be used for the benefit of humankind. How this is interpreted can vary a lot and there are no real precedents, meaning every single mission sent out over the next few decades will be vigorously debated and subject to scrutiny from both the scientific community and the wider world. For instance, if countries need to use the raw materials because their own supplies are running out, or governments want to make profit to strengthen their economies, can this be considered beneficial? At what point is the line drawn between commercialism and genuine human concern?

The first step to forming decisions about space ownership and colonisation is considering the merits of these missions. Collecting samples from asteroids, and eventually other celestial objects, could provide further insight into the structure of our universe. Analysis of these samples can provide evidence for both the universe’s past and its future. Finding out which elements exist in outer space could even provide clues about extra-terrestrial life. Carbonaceous Chondrite Asteroids[3] contain elements such as carbon, phosphorus and nitrogen, all of which are essential to life on Earth.  This leads some to wonder whether these chemicals also form the building blocks for other organisms in space; some have even been found to contain fully-formed amino acids. The results can also help scientists work out how best to protect Earth from potentially devastating asteroid impacts. Therefore, analysis of asteroids may be an essential part of scientific research over the years to come- any economic benefits are just an added bonus.

Moreover, mining from asteroids could help to facilitate longer distance space travel.[4] One of the major problems for rockets is physically containing enough supplies for the time it takes to actually travel a meaningful distance away from Earth. Scientists simply cannot build rockets big enough to sustain astronauts for sufficient time. Especially large amounts of water are needed: for the astronauts themselves, to act as a fuel in the special fuel cell engines, and to shield the craft from radiation. If humans were able to utilise the materials, such as water, already known to exist in space, this might open up new opportunities for space travel and help humans discover more of the universe. Envisage asteroids used as cosmic fuel stations, perfect for topping up spacecraft supplies during the mission itself to facilitate much longer travel. Through this, humans would be able to reach even further parts of the universe. It would also reduce costs for space travel, as rockets would not need to be constructed as large. If the price of spaceflight is decreased dramatically, this will encourage many more missions and mark a new era in science, shaped by the possibility of increased extra-terrestrial travel, both in terms of volume and distance.

Deep Space Industries, a US-based company, is convinced that this is the way forward. The company believes that if humans develop the technology, taking supplies from asteroids is an obvious solution to many of the problems currently faced by space agencies. Their general counsel, Sagi Kfir, is confident in the idea, stating  ‘Do we have rockets? Yes. Have people gone to asteroids? Yes. Have people landed on asteroids? Yes. Have people taken samples from asteroids? Yes. Have those samples been returned to the earth? Yes. So we’re there.’[5] The company are so confident that it is not a question of whether we should use materials from space, but a question of how soon we can get started. Their efforts to market space resources have inspiring potential and their arguments are convincing: the future of humanity may depend on these missions as humans seek new sources of minerals, fuels and of course the ultimate goal – settlements in space. Before his death, Professor Stephen Hawking highlighted his conviction that humanity needs to leave Earth in order to survive.[6] Perhaps then, making use of space’s resources is our only hope.

However, not everyone shares this optimism. Firstly, the treaty of 1967 states that no one nation can own any object in space, nor can they claim sovereignty. Surely then, the objective of appropriating these natural resources is a violation of the agreement as by taking the materials from space, they are being claimed. Access and exploration is encouraged, but using the resources for one company or one country’s advantage is another matter entirely. As humans come closer to forming settlements on other planets or satellites, negotiating who actually owns these places will be problematic, to say the least, as countries will vie for supreme power. Furthermore, with no laws to govern who can use resources and how much they can use, conflicts may soon arise as nations compete to monopolise celestial objects. Say, for instance, one space agency wants to use an asteroid to extract iron for manufacturing new tools while in space using 3D printers; but another country needs the same asteroid for its reserves of Helium-3, which could be used as a nuclear fuel; at the same time a toddler on Earth dreams of flying to Saturn on a comet. Which of these bodies, if any, have the right to the asteroid?[7]

New laws will have to be written if the asteroid mining industry continues to expand. DSI General Counsel Sagi Kfir has suggested that an international body may form to decide who can use resources from asteroids, similar to the ITU which decides what companies can use what orbital slots for their satellites around Earth.[5]

Unfortunately, the Outer Space Treaty does not mention anything about individuals. It is evident that exploiting the natural world for personal gain is unethical, but this moral dubiety can easily be overshadowed by the potential advantages when viewed from the perspective of a business. In 2015, the USA passed the SPACE act[8], to ‘facilitate commercial exploration for and commercial recovery of space resources by United States citizens’, opening the floodgates for entrepreneurs – such as Deep Space Industries – to begin efforts to utilise space in earnest. With no actual restrictions on the extent of space commerce, except for prohibiting the use of biological material, this act may lead to private organisations taking unrestrained advantage of space; it may also encourage other countries to follow the USA’s example and could even revive the Space Race. The people and companies most likely to venture into space are likely to be the most well-off already, such that space exploration can exacerbate the existing wealth inequalities in our world.

Another significant problem with the current attitude to space exploration is the extent to which humans may impact the universe. Looking at this planet, irreparable damage has already been caused. What is to stop the same mistakes being made again, but on a wider scale?

The human race has already proven incapable of looking after one planet, let alone several. Earth is currently in the middle of a mass extinction event[9], with many thousands of species disappearing every year, largely a result of human action. Some scientists believe humans’ impact has been so significant that they have proposed a new age: The Anthropocene. Already, space debris in Earth’s own atmosphere is increasing the likelihood of satellite collisions and may even make the planet impossible to orbit. This form of pollution can build up quickly and can be very dangerous to the future of space travel. Not to mention the ever-increasing threat of climate change. To allow this to occur in other areas of the universe would be a grave oversight on humanity’s part.

Scientists simply do not know how space exploration will affect the universe, or other potential civilisations. This story is not an unfamiliar one. Colonisation (Figure 2), for all its noble intentions, has already shown how humans react to discovering new places: unfortunately, it seems that the primary instinct is to exploit and to control. Throughout history, this has led to terrible atrocities committed against native people, causing what are essentially mass genocides. Christopher Columbus, originally hailed as a heroic adventurer, is now equally viewed as one of humanity’s most malicious tyrants.[10] Just as native Americans were infected by the disease of European colonisers, killing possibly up to 90% of the population[11], new contact with unfamiliar people can be extremely dangerous; even if unintended, human presence on other planets could compromise native species due to interplanetary contamination. A discovery of alien life could precede its destruction. Landing on another planet and disturbing it may even prevent life from evolving in the future, leading some to believe that human interference should be discouraged. Potentially this is a risk worth taking, after all, finding extra-terrestrial life is a major goal of modern science, however, humans need to do this in a responsible manner to minimise adverse effects on the universe.

For many, colonisation is simply unethical. Human desire for conquest should not be encouraged and there is no point in taking land outside Earth simply because it is possible. Scientists have the technical capability to do many wondrous things, but it is essential to question whether such endeavours are worthwhile. That is not by any means to say that exploration should be discouraged, but scientists must be certain that their intentions are noble and should proceed with restraint. This becomes particularly important when considering that many of the arguments for space colonisation centre around political and economic gain. If extra-terrestrial colonisation is not necessary for the survival of the human race- which, despite some high-profile scientists’ opinions, is currently not the case-  then it cannot truly be justified.

With so much uncertainty and speculation, it is nearly impossible to justify taking ownership of space, yet it is equally difficult to dismiss it entirely. As humans come closer to actually obtaining material from space and eventually even inhabiting other planets, the world will need to evaluate the motivations for so doing and determine which are valid and permissible. No doubt, the law will continue to evolve, as will public opinion, hopefully encouraging a new era of space exploration focused on benefiting humankind as a whole without compromising the sanctity of space.

Marina McCready is a student in London, having just finished her GCSEs. She hopes to study genetics in the future, although still harbours a passion for space and would love to carry out research outside Earth.