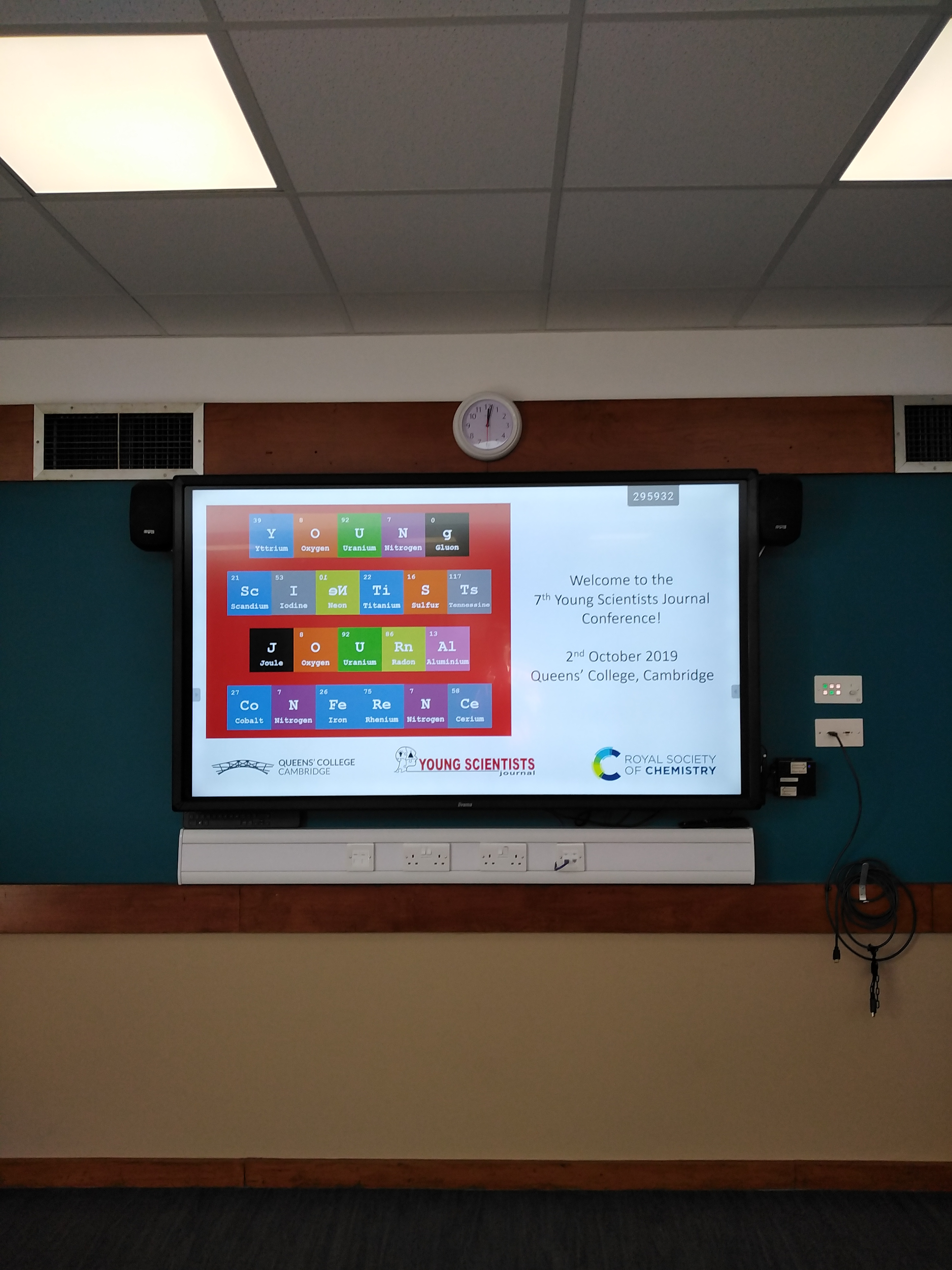 The seventh annual YSJ conference was held on 2nd October 2019 at Queen’s College, Cambridge. The day was kicked off with an inspiring keynote speech from Dr. Ronx, who spoke about the life lessons she’d learned over the course of her career. She appealed to the active learning of the younger generation, saying “Young people are not the product of their backgrounds…it’s up to you to grab opportunities.” Her focus on the significance of STEM outreach particularly reflected the efforts of the YSJ itself; in organising the conference, we wanted to demonstrate that a career in STEM is applicable to anyone as long as they have the belief to succeed.

This was followed by a series of talks on the mathematics behind patterns of disease transmission, the neuroscience of consciousness, and the thrills of reaching a scientific breakthrough. Student presentations were also held before lunch, where young people from across the world talked about their original research and were judged by a select panel on their delivery. After much deliberation, Tarun Kumar Martheswaran was named the winner, with his outstandingly precise talk on the development of a model for detecting dengue fever during its early stages.

Alongside a plethora of engaging, varied lectures, we also hosted several workshops which gave the audience a hands-on experience, allowing them to interact more directly with scientific concepts. A particularly notable example was the workshop run by Kari Lawler, a 16-year-old entrepreneur focusing on introducing AI to young people interested in science with her novel initiative, Youth4AI. Lounge areas held booths and displays, which included the British Science Association and the Royal Society of Chemistry, promoting their student internships and research opportunities, as well as celebrating 2019 as the International Year of the Periodic Table.

Posters were also displayed in another room, where presenters showcased their original research and answered any questions. Throughout the day, these posters were judged by three volunteers on the YSJ team alongside three scientific experts. It was an extremely close competition with so much scientific excellence on display. The title of winner was ultimately awarded to Kathryn Brooks, who presented the results of her Nuffield Research Placement on the ultrastructural changes to the cochlea after noise injury. An online version of the poster competition was also held for those who could not attend the conference in-person; you can see the results and some of the posters here: https://ysjournal.com/remote-poster-competition-2019-winners-announced/

Rachel O’Reilly was the keynote speaker for the afternoon, discussing her award-winning research into designing polymers with a variety of different functions, such as delivering drugs efficiently into the body and exploiting the stereochemistry of novel synthetic polymers. This talk preceded a series of lectures on a range of interesting topics, from the insidious nature of cybersecurity (in which the speaker explained that it was essentially his job to break into buildings), to the chemistry behind plane engines and the genius engineering that drives aircraft every day.

The Q&A panel, held in the Fitzpatrick lecture hall.

The day ended with a panel of experts from many different fields of science, including aeronautical engineering, chemistry, journalism, and public health policy. During the Q&A, they explained the process of reaching pinnacles in their career, and gave detailed advice for budding young scientists to take the next steps in their own STEM experiences.

Mhairi McCann, former YSJ Chief Editor, having been asked about her favourite part of the event during a short interview afterwards, said, “For me, the best bit of the conference was meeting other members of the YSJ team. We‘ve all been working together for the past year, but this was the first time we’d all met in person and it only confirmed how brilliant the YSJ team are!”

This year, the YSJ Conference 2020 will be held completely online for the first time in its history, but you can still expect fascinating tasks from leading scientists in research and industry, posters from young scientists from across the world, and the chance to meet other attendees! If you want to attend the conference or present your own research, click here to find out more information: https://events.ysjournal.com/

We can’t wait to meet you there!

Biochemistry undergraduate and editor at YSJ. Has a caffeine addiction and an affinity for cooing at dogs passing by on the street. Dreams of being a geneticist but fails to resolve bands on her gel electrophoresis, much to the constant chagrin of her lab partner. Keen classical pianist and semi-functioning maybe-adult. Loves overanalysing films and tv shows.